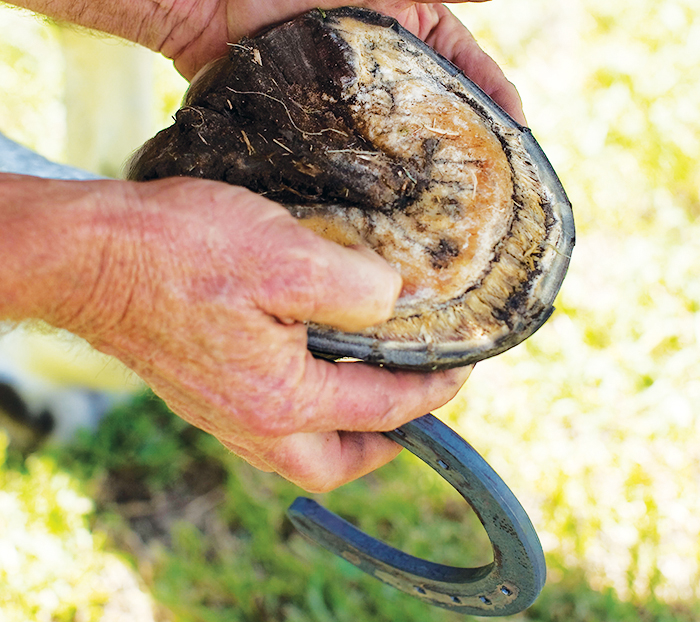 Extreme trimming of the hoof had forced the mare to walk on her soles.

Dusty, a 14-year-old Paint mare with a history of laminitis, was presented as severely lame to the Lee Veterinary Clinic in Atmore, Ala. The horse was brought in when the owner found her lying down, unable to walk due to the pain in her forefeet.

Examination revealed that a farrier, attempting a form of “corrective shoeing,” had trimmed the hoof walls on both front feet approximately 0.25 inches off the ground, exposing the entire sole. His theory for trimming had been that forcing the horse to walk on her soles would toughen them and thus relieve her distress from the laminitis.

There are reports in the scientific literature suggesting some relief of laminitic pain can result from sharing support of the foot among the wall, sole and frog. However, this extreme trim was clearly a misinterpretation of that literature.

The procedure left the horse in such excruciating pain that unless effective therapeutic measures were taken, the horse would have had no chance to survive. Even if the horse were to remain pastured, it would most likely have developed pressure necroses of the soles within days. Sooner or later, euthanasia would be the only solution.

Prior to this, Dusty had been seen multiple times at the Lee Veterinary Clinic for her laminitic condition. The most recent X-rays were updated on this visit and confirmed that the horse was not experiencing further rotation. There were bilateral bulges in…