Millwater’s Farriery: The Illustrated Dictionary of Horseshoeing And Hoofcare

Millwater’s Farriery: The Illustrated Dictionary of Horseshoeing And Hoofcare By David Milllwater

For almost 20 years, Dave Millwater has provided the equine industry with a dictionary of farrier terms and technical language, which he updates almost yearly.

Millwater has gone to the next level in his latest book, Millwater’s Farriery: The Illustrated Dictionary of Horseshoeing And Hoofcare.

More Than A Dictionary

The 268-page book not only defines the hundreds of terms and language used by farriers as he did in his dictionaries, but it also gives the reader an in-depth look at the processes and procedures of those terms and phrases.

For instance, Duckett’s Dot is not merely covered as a specific spot on a frog from David Duckett’s theory of balance. There are several pages that explain Duckett’s theory on balance in great detail, along with illustrations that help the reader understand the theory so they may use the information in their practice. 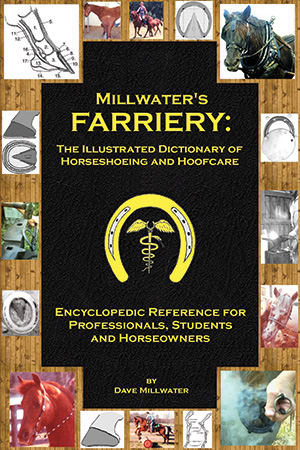 I found the selection on horse holding to be particularly entertaining. This is a must-read for almost every horse owner who insists on holding their horse for the farrier. Millwater gives them, in plain language, “rules” to keep the farrier happy and safe.

The expanded definitions that Millwater gives many of the topics makes Millwater’s Farriery a mini-textbook of farriery. Lots of illustrations enhance the value of this book.

Approximately one-third of the book deals with “Historical References,” which has lengthy reprints of the 1912 Army Horseshoer and George Fleming’s 1869 book Horse-Shoes…