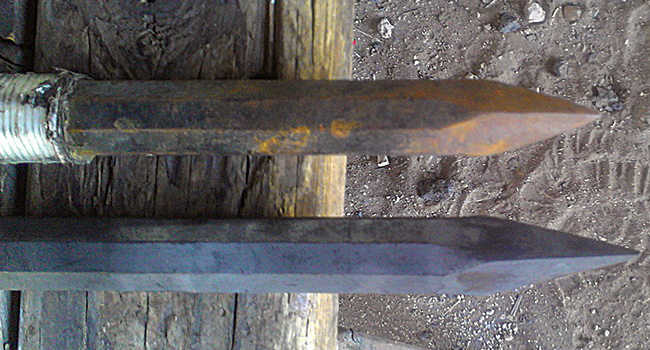 Forging a Business on the Side

By Pat Tearney posted on July 1, 2012 | Posted in Business Practices

A used mining bit (top) next to one that Utah farrier Jacob Manning has cleaned up and resharpened. Manning also puts a proper edge on new bits.

There are still plenty of horseshoers out there who see their business drop off considerably during the winter months.

Some farriers deal with this by trying to make sure their shoeing book includes as many horses that will be used year-round as possible. Others put in long hours during the peak-riding season, reasoning that every extra horse they work on during that period takes the place of one they don’t see during the slow winter months.

Others try to find other work for the winter months to supplement their income. If they can find something that takes advantage of the skills they’ve mastered while shoeing horses, all the better.

Jacob Manning of Roosevelt, Utah, found one such opportunity during the past winter. The American Farrier’s Association certified journeyman farrier developed a part-time business putting an edge on drill bits used in the area’s Gilsonite mines.

Gilsonite is a shiny black hydrocarbon and northeastern Utah is one of the only places it is found. It is used in the manufacture of a variety of materials, including ink and paints, asphalts, cements and oil- and water-based drilling fluids.

Manning was approached by a long-time acquaintance who asked if he could forge a proper tip on new drill bits, as well as re-sharpening worn ones.

Premium content is for our Digital-only and Premium subscribers. A Print-only subscription doesn't qualify. Please purchase/upgrade a subscription with the Digital product to get access to all American Farriers Journal content and archives online.
KEYWORDS business on the side careful planning forging skills Jacob Manning supplement supplement income winter months

Getting a Handle on Expenses in a Farrier Business

Tackling the Human Side of Horseshoeing

Advice On A Multi-Farrier Business