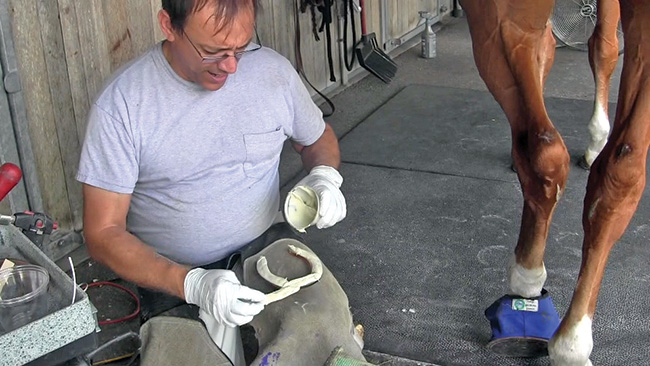 By Red Renchin posted on July 1, 2012 | Posted in Equipment, Shoeing

Florida farrier not only invented his own glue-on shoe, he’s developed his own meticulous methods for putting them on

While having breakfast at Palm Beach Farrier Supply last winter, some of the other regulars suggested that I interview local farrier Curtis Burns about his shop and business, Burns Polyflex Shoe. It was a good suggestion. Burns is my kind of guy — a smart, outside-the-box thinker, who is constantly working at improving the status quo.

Burns originally had his sights set on being a racehorse trainer. To succeed, he found it necessary to do most of the work himself, including shoeing the horses in his training barn. Soon the word got out that this young guy was a pretty good plater, and he became a farrier by default. When one of his clients had a horse plagued with recurring lameness problems, Burns designed and made a polyurethane shoe to help him. The rest is history.

In 2002, Burns and his wife, Diane, started making and selling his Polyflex shoes for the racehorse market. The Polyflex shoe is a polyurethane shoe that is unique in that it has a metal rod in its core and is designed to be glued on. He has recently expanded into the sport horse industry with a line of shoes suited to those disciplines. He estimates that he has glued on over 2,000 pairs of shoes with the horses achieving amazing success.

Burns agreed to share his techniques with me. I have frequently observed other farriers gluing on shoes and, over time, have seen small improvements in tools and techniques. Watching Burns was like hitting…

Many Benefits For Glue-On Shoes

Getting Ahead With Glue-On Shoes

Understand When to Use Direct and Indirect Glue-On Shoes