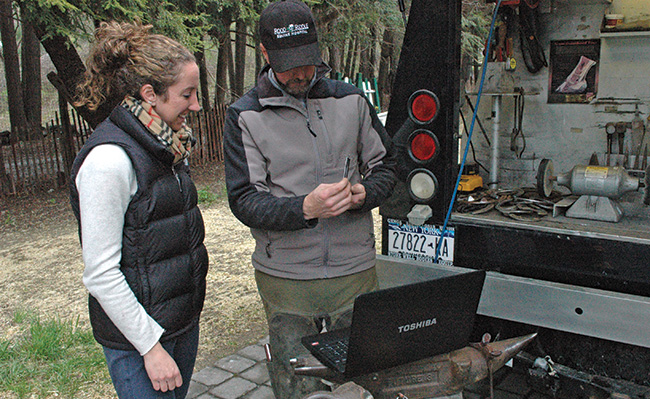 Not a Textbook Case

By Jeremy McGovern posted on September 1, 2012 | Posted in Therapeutic Shoeing

After 4 and a half years, a club foot has delivered lessons in maintaining solid basics, utilizing consultations, relying on teamwork and employing creative approaches to hoof care.

In February 2008, Taylor Keenan, right, began working with owner Mary Fasciana, left, on her club-footed horse. Inset: This was the state of the horse’s feet when Keenan first saw him.

In early 2008, Clinton Corners, N.Y., farrier Taylor Keenan was starting to develop a reputation in the Hudson Valley as a go-to farrier. At that time, he successfully treated a recurring quarter crack. The owner, thrilled with the outcome, recommended Keenan to a related account.

Owned by Mary Fasciana, Baby is a 17.2-hand Oldenberg gelding that was 7 years old in February 2008. The horse had already gone through a tenotomy to correct a club foot that was thought to be from a recessive gene. It was winter time when the surgery occurred and the horse stood in the stall for several months to recover from the surgery.

Upon meeting the horse, Keenan was excited to work on such a severe case, but admits he was also nervous. Since graduating from Cornell University’s farrier program 5 years prior, the body of his work focused on developing his trimming and shoeing techniques, so Keenan was thrilled to tackle the new challenge and utilize what he had learned.

Keenan certainly got the challenge he was looking for. Over the past few years, this case has presented several frustrating moments that tried the patience of everyone involved, but also has provided lessons in thinking outside the box in regard to shoeing modalities.

Three Ways Not to Succeed in a Horse Capital