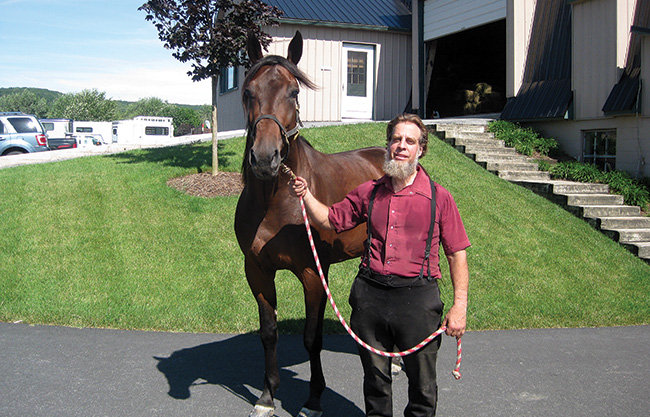 Eli Beiler poses with Ice Machine, a Standardbred he worked on at Ginger Tree Farm.

The first thing you notice about Eli Beiler is that he is Amish. This is evident by his distinctive handmade clothing, consisting of a plain shirt, black jacket and pants, suspenders, all topped off by a straw hat in summer and black, felt hat in winter. You can also tell he’s married, because he is required to have chin whiskers.

The Amish culture is noted for its fine craftsmanship but this is not so true of the art of farriery. This is due to two things. First, their carriage horses, which they rely on for transportation, require only a utility shoeing job that does not have to be fancy. The other is that the Amish farriers traditionally have been a closed community and did not attend the continuing education opportunities many other farriers did

But this is changing very quickly now and Beiler could be the poster boy for the new breed of Amish farrier.

In 1998, Eli attended his first American Farrier’s Association convention in Rochester, N.Y. He went to another convention in Lexington, Ky., then back to Rochester again a few years later. In 2003, he attended his first International Hoof-Care Summit. He can boast of perfect attendance at all nine Summits as well as numerous regional clinics. Beiler was a presenter during the 2012 Summit, and led hoof-care roundtable discussions on carriage horse shoeing in 2011 and 2012.

Living Life in the Slow Lane, but Shoeing on a Fast Track

More on the Stages of Farrier Development