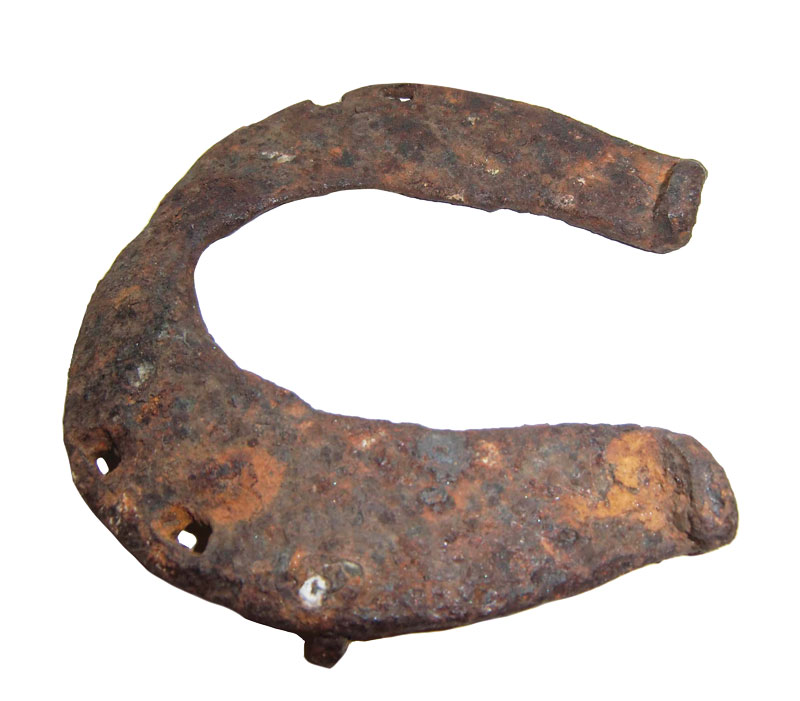 I was given this horseshoe, which remains in my possession, about 25 years ago. It was found at the National Stud, Newmarket, England, when they were digging a post-hole while referencing a paddock.

I had the pleasure of having the late great Col. John Hickman date it for me. He was confident that the design put it close to 1650 AD. It is in quite a worn and rusted state, but the nail-hole pattern is quite clear. One nail remains in situ; you can see it on the quarter at the bottom. It is about 5 inches wide (125mm) and quite finely nail-holed to my eyes.

The distinctive feature of caulkins on this 17th-century shoe links it with the shoe featured in the December 2022 issue of American Farriers Journal and may give us some clue to the horse that wore it. Very worn, despite being wide-webbed and having caulkins would suggest a sizeable horse pulling a load on an abrasive road. Found only yards from the main route from London to Norwich, it could have been from a carriage horse. Perhaps it was lost on Newmarket Heath on a racing day, when the wealthy people were taken from one side of Newmarket to the other, following the races.

This was a period of political turmoil in England. The king had returned from exile in France, and the Puritan government overturned (they had banned racing). Party time had begun…

Premium content is for our Digital-only and Premium subscribers. A Print-only subscription doesn't qualify. Please purchase/upgrade a subscription with the Digital product to get access to all American Farriers Journal content and archives online.
KEYWORDS carriage horse Col. John Hickman Simon Curtis What's This? Evaluate a Horse Before Working with it

A Half-Century’s Lessons on Working Smarter