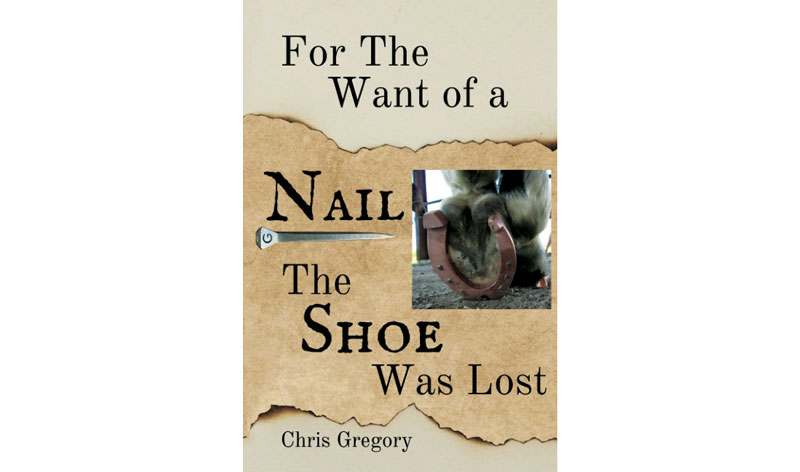 For the Want of a Nail, the Shoe Was Lost

Who has directly influenced your farrier career? If you’re just starting out, your list likely isn’t long. A little time and initiative will eventually fill the gaps. If you have some skin in the game, your list might resemble the one compiled by Chris Gregory in his book, For Want of a Nail, the Shoe Was Lost.

The Heartland Horseshoeing School founder and instructor recognizes a dozen contributors to his career: Frank Turley, Mike Edwards, Danny Ward, Kevin Hatridge, Dave Showen, Jim Keith, Bob Marshall, Dusty Franklin, Sandy Beveridge, Derek Gardner, Paul Duddy and Dr. Mike Miller. Although a chapter is not devoted to his wife, Kelly is a steady presence throughout as a testament to the importance of a strong, reasoned and supportive life partner.

While Gregory compiles this easy-to-read salute to those who played a role in shaping his Hall of Fame career, it provides more than gratitude. It illustrates the importance of drive and the humility that often accompanies learning, while also offering tips, anecdotes and advice.

Gregory had been shoeing for 3 years before his path crossed Frank Turley’s at the Turley Forge Blacksmithing School in Santa Fe, N.M. His first project was building a horseshoe sandwich, which is a welding exercise. Up to this point, Gregory had struggled with forge welding, so you might appreciate the doubts that he was experiencing. Yet, with Turley’s instruction, Gregory was surprised at how easily he took to it.

Completing such a difficult exercise after…

Hoof-Care Highlights: The Week of March 20

Forging Tips From The Heartland