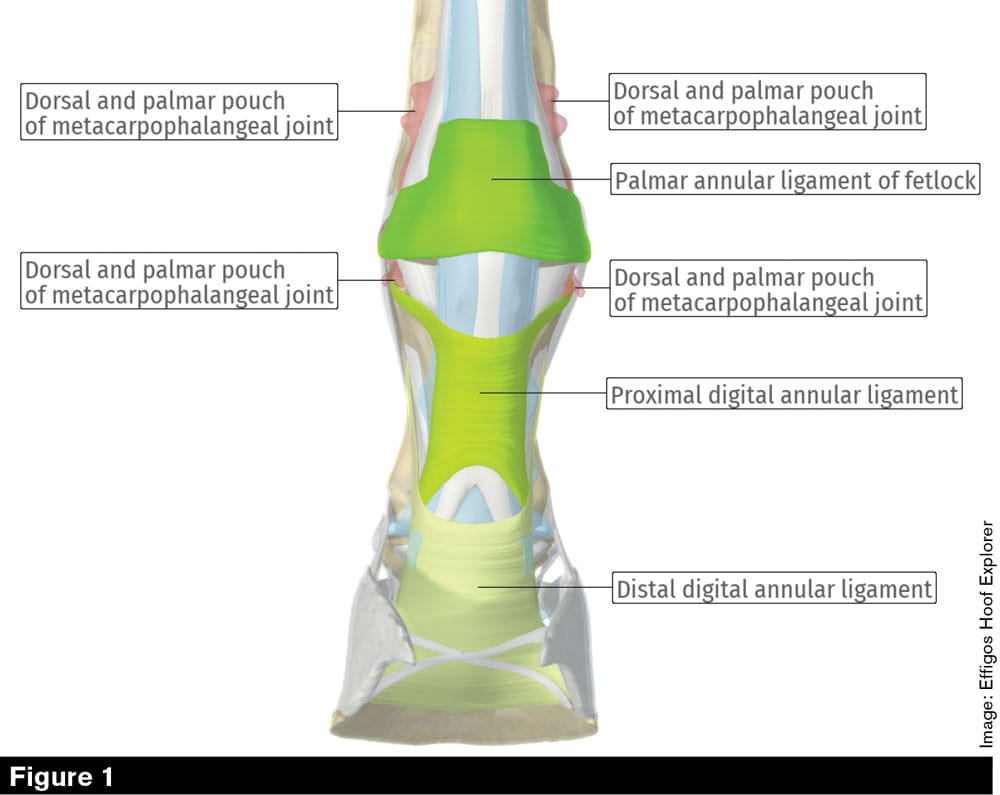 Tendons and Suspensory Ligament Provide the Horse Power and Stability

The functional anatomy and biomechanics of the equine fascial reinforcements, tendons and ligaments

Digitigrade posture of the distal limb is characteristic for animals that can move at high speed (Hildebrand et al, 2001; Patel, 2010).

The benefit of the extended position of the equine distal limb, mainly determined in the metacarpophalangeal joint (MPJ), is the gain in elastic strain energy in the flexor tendons that cross the MPJ and digital joints palmarly/plantarly (Biewener, 1998). The energy expended during locomotion, arising mainly from muscular forces generated to support an animal’s weight and motion, can be reduced by taking advantage of elastic recoil in long tendons of distal extremity (Butcher, et al, 2009. Herrick, et al, 1978).

Conservation of energy is principally achieved by the storage and release of elastic strain energy in the tendons and ligaments of the limb (Harrison et al, 2010; McGuigan et al, 2003; McNeill, 2002). It is proven that besides the strain energy stored and released in the elastic elements of the muscles, the majority is achieved within the long tendons or ligaments…

Premium content is for our Digital-only and Premium subscribers. A Print-only subscription doesn't qualify. Please purchase/upgrade a subscription with the Digital product to get access to all American Farriers Journal content and archives online.
KEYWORDS Jenny Hagen role of suspensory ligament for horses role of tendons for horses what stabilizes horses legs where horses get their power Lowering Vs. Raising the Heel to Treat a Suspensory Ligament Injury