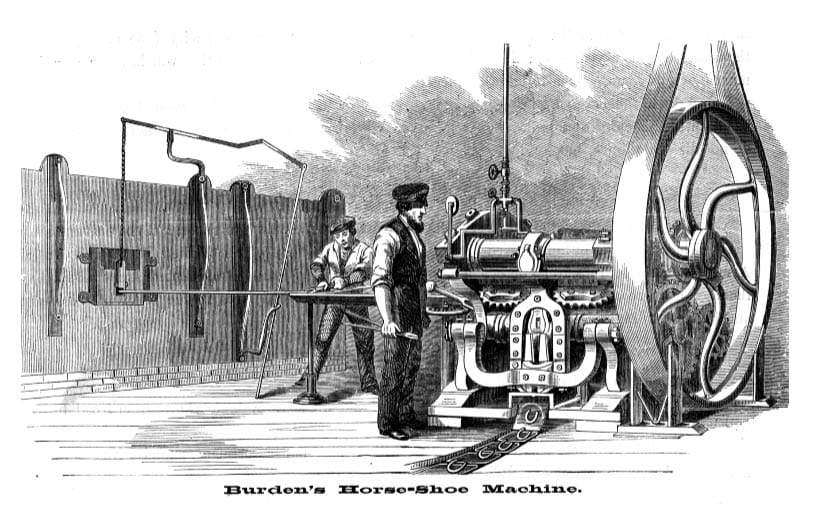 How the Horse Shaped Horseshoes

From transportation to the show ring, the changing role of the horse and industry influenced the production of horseshoes

Pictured Above: In 1835, Henry Burden, a Scottish engineer at the Troy Iron & Nail Factory, patented a machine that he would eventually improve upon in the 1840s and 1850s and would have the capability to make one horseshoe per second.  Photo: Farm Collector Magazine, FarmCollector.com

American Farriers Journal has been a valuable tool to farriers for over 4 decades. In each issue of the magazine this year is featured an article looking back at a moment during that time frame. As we reflect on this history, I find myself thinking about the history of another, essential farrier tool: the horseshoe.

Every day, thousands of horseshoes are nailed or glued on to the hooves of horses around the world. Farriers depend on the availability of the many types and sizes of horseshoes in the 21st century. At times…

Premium content is for our Digital-only and Premium subscribers. A Print-only subscription doesn't qualify. Please purchase/upgrade a subscription with the Digital product to get access to all American Farriers Journal content and archives online.
KEYWORDS farrier history horseshoe history how were horses used in history when were horseshoes invented where do horseshoes come from

How Reading the Horse Can Make Your Job Easier

Non-Metal Horseshoes: Knowing Why to Use Them is as Important as Knowing How

How to Achieve the Benefits of the Bank Robber Horseshoe