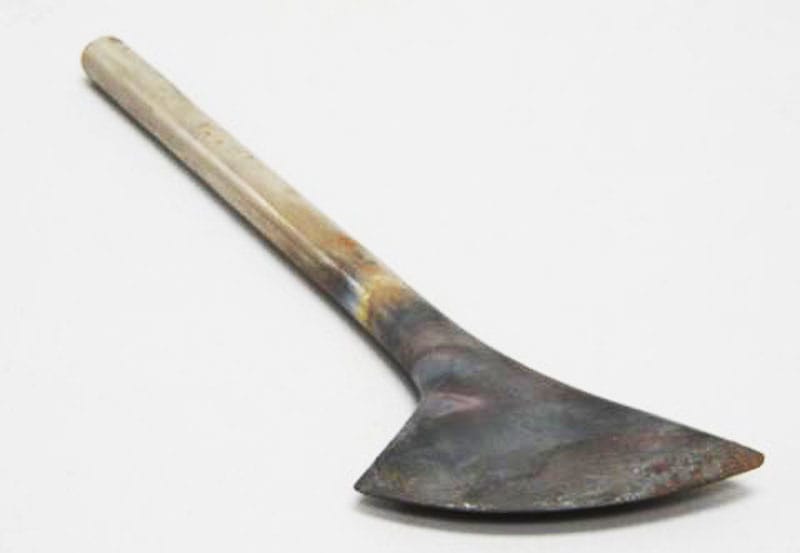 The forged firing iron was used by veterinarians for the treatment of various types of lameness in horses in the late 19th century. This flat firing iron, on display at the Michigan State University (MSU) School of Veterinary Medicine, is one of more than 500 veterinary instruments shared between Michigan State and the veterinary medical museum at the Galloway House and Village in Fond du Lac, Wis.

The first written report of thermocautery, or the firing of a horse’s legs, appeared in 500 A.D. According to Dr. Fred Born, who designed and constructed the “250th Anniversary of the First Veterinary School in the World in Lyon, France” exhibit in 2011, which is on display at the MSU School of Veterinary Medicine, the wide blade is used for feather-firing and the points are used for pin-firing. Pin-firing is believed to stimulate tendon repair by counter irritation and consequently help the healing process. Firing is generally used to treat horses with splints, curbs, tendon and ligament injuries, and fetlock and surrounding soft tissue injuries.

The practice is no longer widely accepted. The American Association of Equine Practitioners states it does not support the use of thermocautery or pin-firing, given “the advent of current science-based procedures to treat specific musculoskeletal conditions in the horse.”

If you have more information about the firing iron, please share it with us at kkubisiak@lessitermedia.com.