Roth, a member of the International Equine Veterinarian Hall Of Fame, was looking to expand when he asked long-time friend and competitor Marcella Kester if she was interested in selling OSHS in the fall of 2018.

“The transition has been seamless,” Roth told American Farriers Journal. “I’ve always admired what the Kesters do, strong competitors.”

Kester over OSHS after her husband Reggie Kester passed away in 2008. Roth says the sale will give her a chance to retire and enjoy her grandchildren. Kester is excited to watch her granddaughter play college basketball and to watch her great-grandchildren grow up. The Kester family remains active in OSHS, as well as in their store, American Farrier Supplies.

“The school was like a child that grew up with us,” she told American Farriers Journal. “It was really important to us to do a good job and improve it all the time. We had two kids who were raised there, and all our grandkids were raised there. Jack didn’t try to change anything, kept everything the same. I think that’s very respectful of Jack.”

Roth felt there was something to learn from how the Kesters’ store was operated, and he acquired American Farrier Supplies in addition to the school. Reggie’s son Regan remains the head farrier instructor while Reggie’s granddaughter Kash remains in charge of office operations.

“Reggie Kester was my competitor for a long time,” Roth says. “We were the same age. Reggie passed a few years back, and Marcella was running the school. We’ve always been close friends, and one day I just asked if she’d be willing to sell it. She said yeah, so we did it.” 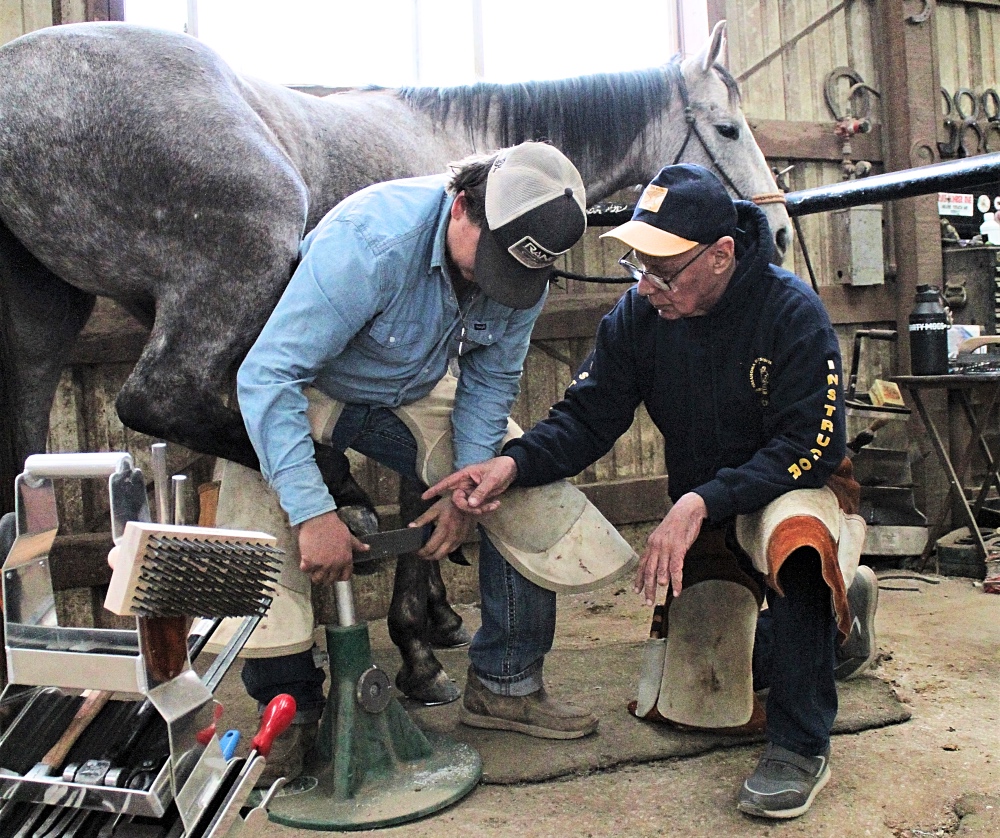 Roth began his interest in farriery young by shoeing horses and wanted to start his own horseshoeing school. He began OHS in 1973 in Stillwater, Okla., but he was then accepted into the Oklahoma State University College of Veterinary Medicine. Throughout college, he worked as a farrier until he graduated in 1977. The school took off after his graduation, now one of the oldest horseshoeing schools in the U.S. Since its beginnings, the school has moved a few times, and Purcell Farrier Supply has been added to provide the students, as well as local farriers, with tools. Recently, Roth has introduced a mobile app where farriers within an 80-mile radius can order from the store and have their items shipped to their house.

Roth is still in charge of OHS and runs the school much like that of a drill sergeant, he says. Students work 6 days a week in either a 6-, 8- or 12-week course, including holidays. The mission statement for his school is, “No frills craftsmanship and horsemanship.” The curriculum for OSHS will stay the same, with the 6-week course remaining in Reggie’s vision.

“That’s the way Reggie Kester set it up years ago, and he wanted 6 weeks of strongly supervised students putting on keg shoes. And I like it that way,” says Roth.

The Kesters built OSHS by hand in 1975 on 5 acres of their land. Reggie taught all the classes, and Marcella filled in if Reggie had to run into town. Reggie taught her horseshoeing skills, and she learned bookkeeping on the job before going to school for it years later. For many years, she cooked homemade lunches for everyone at the school and the office.

“Our office is treated like you’re coming into someone’s home,” Marcella says. The warm, welcoming atmosphere is something that truly appealed to Roth.

The purchase of OSHS came about as Roth was thinking about his future. He had been open to expanding, but he wasn’t going to pick up any old school. It had to have the right atmosphere to it, he says. And the Kesters’ school has just what he was looking for. The school has an open and welcoming ambiance, but don’t think it’s as laidback as it feels. The students aren’t afraid of hard work, which always appealed to Roth’s “hardcore” work ethic.

In addition to his purchase of the school and the new app for his farrier store, Roth will be introducing his hoof shape templates for those making handmade shoes. Form follows function, he says. The templates will be available for purchase through his store, Purcell Farrier Supply. Roth is often coming up with new ideas, including his 3-unit vending machine at Remington Park Racing Casino in Oklahoma City.