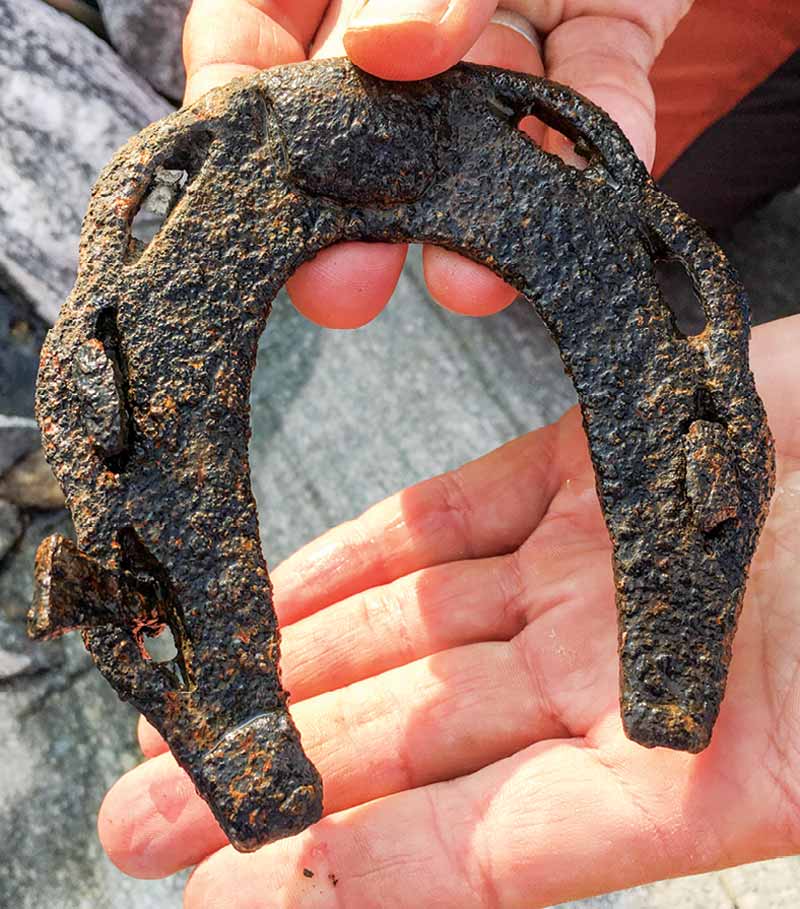 An ancient horseshoe was recently discovered at the Lendbreen ice patch in the mountains of southern Norway. Secrets of the Ice researchers uncovered the shoe from beneath a rock after the ice that was preserving it had melted.

The shoe is quite heavy, according to Lars Holger Pilo, a researcher from Oppland County Council. Due to its weight, Pilo doesn’t think the ice carried this artifact very far from where it was dropped.

“The horseshoe probably tells us where a packhorse passed over the ice 800-900 years ago,” Pilo told American Farriers Journal.

The shoe has three nail holes on each branch, and three nails remain intact. Organic matter was noted on one of the nails, which could be part
of the horse’s hoof wall. The discovery was made in September 2018, so the shoe is still on its way to a museum for possible DNA-analysis. The testing would inform researchers of the type of packhorse used in the mountains of Norway nearly 1,000 years ago.

“There are also other horseshoes and horseshoe nails that mark the trail,” says Pilo, “but none as fine as the one we published on Facebook recently.”

Pilo also notes how medieval horseshoes are smaller than horseshoes today, which informs researchers of the size differences between horses then and now.

Do you have a shoe or tool that you’d like to share or want more information about? Submit photos of your item, as well as its history and…

Premium content is for our Digital-only and Premium subscribers. A Print-only subscription doesn't qualify. Please purchase/upgrade a subscription with the Digital product to get access to all American Farriers Journal content and archives online.
KEYWORDS ancient horseshoe