The first line of defense against hoof disease is usually the farrier. Although horse owners may want their farrier to quickly eliminate a suspected hoof infection in one treatment as part of the routine trimming and shoeing, it is important to provide sound advice in the form of a game plan.The reality is that deeply rooted infections like white line disease and chronic thrush are nearly impossible to kill with one application of a strong topical agent.

Bacteria and fungi are very adept at hiding among healthy hoof tissue due to millions of years of evolution. One application of a strong chemical agent will usually not stop them. Unless you can get to the infection early enough, repeated use of these strong chemical agents can be counterproductive. Caustic chemicals can be deadly to bacteria and fungi, but their continued use is usually harmful to the surrounding healthy hoof tissue and slows the healing process.

A Game Plan That Works

Once a hoof disease is diagnosed, the farrier and the horse owner need to share in the responsibility for the follow-up treatment. A successful game plan includes farrier recommendations on what topical agents to use and how frequently they should be applied.

Important first steps done by the farrier include removing diseased tissue and trimming the flaps of the frog. This lets oxygen into the hooves, giving them a head start in the healing process. Improperly trimmed hooves prevent oxygen from getting into crevices.

Horse owners should ensure that the feet are washed regularly and should keep the affected areas open to oxygen by picking and brushing with a good hoof pick. It is important that the farriers recommend only well-established commercial preparations with a proven track record against hoof disease for treatment. Home remedies can be dangerous and can lead to permanent damage of the hoof structure.

Hoof researchers have now introduced modern hoof treatments that stop bacteria and fungi without harming sensitive surrounding tissue. These pharmaceutical-grade formulas are not as harsh and can be used more frequently. They keep infections under control and give healthy hoof tissue a chance to grow and prosper as nature intended. Even if you don’t kill all the organisms initially, repeated and consistent use of these products may kill enough of them to slow the advancement of the disease to the point that it may grow out with successive trimmings.

A Play Book Against Hoof Disease 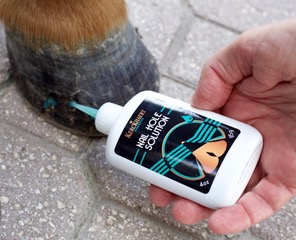 Nail holes are a major pathway for infection. Modern nail hole treatments should provide three functions – seal out external contaminates, clean and disinfect the hole, and repair and close the nail holes from the inside out. Sealants that contain natural protein collagen gel harden on the top surface after exposure to the air. Additional ingredients penetrate holes to clean and disinfect. 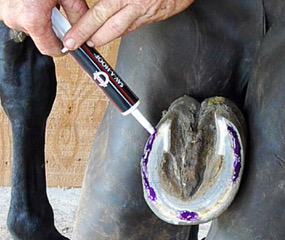 Medical gel preparations have complex time-release formulas which allow their key ingredients to gradually absorb into the affected tissue. These gel formulas are successful in their ability to stop deeply-rooted bacteria and fungal spores in hooves due to the extended contact time they provide in hoof voids versus liquid preparations.

Dual-action hoof conditioners that contain natural protein emulsions provide an effective barrier against bacteria & fungi by repelling external moisture and contaminates. They also help rejuvenate frog function by improving blood flow. Other ingredients are absorbed into hoof tissue to fight infection. This is great for extremely wet or dry conditions. Apply with brush or dauber two times weekly to horn, sole and frog. 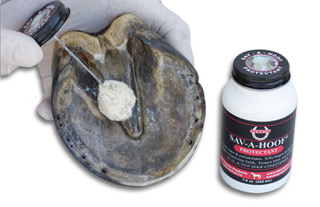 Hoof researchers have introduced safe and effective topical spray treatments for the hoof wall that fight white line disease, seedy toe, thrush, stubborn candida yeast, fungus, mold, anaerobic and aerobic bacteria. They can be used for prevention as well as for early intervention. Ingredients bond to hoof protein and form an antiseptic barrier against infection for long lasting protection. Spray over nail hole and cracks, after grooming or as needed to hoof wall, sole and frog. 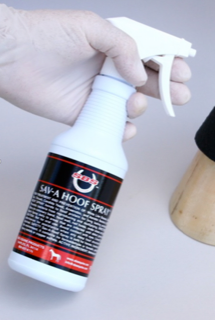 Infections in toes and heels can be serious and progress rapidly if not treated quickly. These areas can be treated easily with either medical gels or liquid formulas using syringes, sprayers, daubers, squeeze bottles or soaking boots. Treat after daily grooming or as directed by farrier. 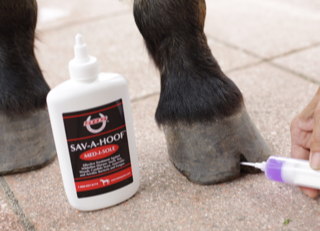 After routine trimming by the farrier, frequent picking and brushing by the horse owner are critical steps for preventing or treating thrush in the clefts of the frog. Avoid using household caustic chemicals that can delay the healing process. Use proven commercial preparations with a successful track record at defeating thrush without harming surrounding healthy hoof tissue. 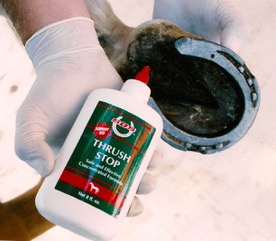 The coronary band is the soft skin that the horse's hoof grows from, just like the cuticles on our fingers. There are copper-peptide remedies available that improve hoof growth and repair cell damage by stimulating blood flow and collagen production. For treating white line disease and abscess exits, use biocides that are made to travel down the horn tubules, which are open at the hair line. 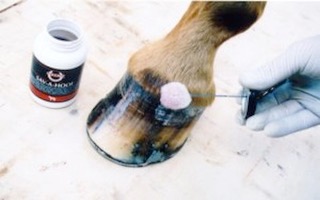 As soon as a hoof disease is diagnosed, the farrier and horse owner should establish a game plan for treatment in writing. The game plan should include a weekly maintenance schedule and product recommendations for treatment. Medical stain-marking products are gaining in popularity. There are two “stain-marking” gel formulas that turn diseased hoof tissue a dark blue color. They are offered by Diamond Thrush Treatment and SBS Thrush Stop BLUE. The stain shows where to add more gel as the color fades. Sav-A-Hoof Gel has been popular for years for use under shoes and pads for fighting white line disease. The time release formula can last for days. Gel stays put deep in the sulcus of the frog without running. Gel also can be used under shoes and pads for prevention and early treatment. For more valuable articles and information about hoof care and treating hoof disease, visit SBS Equine. 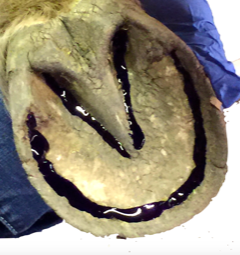