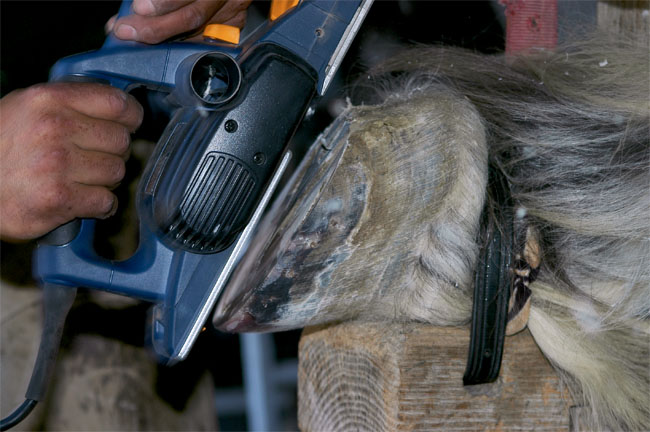 By Pat Tearney posted on December 1, 2007 | Posted in Equipment, Trimming

When Pablo Calderon, a farrier from Riverside, Calif., started thinking about a more efficient way of trimming the hooves of draft horses, he drew on his knowledge of horsemanship as well as that of an area that would seem totally unrelated to draft horses — his trade as a machinist.

Calderon, who has been shoeing horses for 15 years, the last 3 1/2 full time, has developed a method of using a powered carpenter’s wood planer to trim draft horses.

“There is a lot of information, tricks and techniques that I learned as a machinist that I can apply to horseshoeing,” he says.

Calderon has found his method so effective that more and more of his shoeing book is taken up by draft horses.

Calderon had heard of farriers trimming draft horses with grinders, but wanted something that gave him more control. He also knew there were farriers who finished feet with belt sanders, but felt that actually trimming a draft horse foot with a belt sander would take too much time.

The wood planer, he decided, would fill the middle ground between a grinder and a belt sander, giving him the control he wanted as well as the power to do the job in a reasonable amount of time.

Calderon demonstrated his technique on a Clydesdale mare at G&F Carriages in Bloomington, Calif., recently. G&F and its subsidiary, Cinderella Carriages, own…

Taking a Closer Look at a Horse's Conformation

Trimming A Horse With A Long-Toed, Pancake-Shaped Foot