When A Shoeing Job Went For 14 Bucks

By Jeremy McGovern posted on January 13, 2017 | Posted in Business Practices 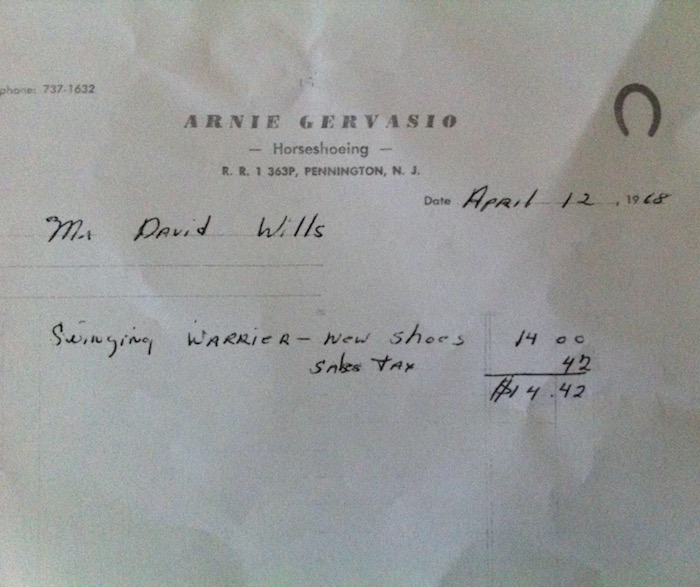 Hearing a song from your youth can transport you back to another time. It can make you nostalgic for how things used to be — or happy they did change. For Arnie Gervasio, seeing an invoice for a shoeing took him back to 1968.

Back in 2016, a client pulled an invoice out for New Jersey farrier Chris Schaeffner. Dated April 12, 1968, the bill was from farrier Arnie Gervasio for shoeing a horse with new handmades. The total sum, including 3% sales tax, came to $14.42. In today’s buying power, that amount is equivalent to about $100.

Schaeffner sent a picture of the invoice to fellow Garden State farrier Bob Pethick, who then shared it with Arnie Gervasio. Although he doesn’t remember the horse, he’s quick to talk about what shoeing horses were like back then.

Today, regarded as one of the finest sport horse farriers, Gervasio has shod horses for the highest level of competition, and now splits his year between New Jersey and Wellington, Fla. Back when he wrote these invoices, he had been shoeing full time for a few years.

“I started out shoeing everything I could — reiners, backyard horses, anything to make a living,” explains Gervasio, who was also splitting his time training Quarter Horses. He made the jump to only shoeing sport horses during the 1980s.

This isn’t the first invoice he came across. Gervasio mentions he’s come across his old invoices that total just above $100.

“It was amazing to us that we could make $100 a day,” he recalls. “There would only be a couple of days a year where you’d have that. Back then, we made all of our shoes and didn’t use things like grinders.”

It isn’t the luxuries on a shoeing rig that is considerably different, Gervasio points to how young farriers can make a good living working for others. When he started going down to Wellington, there were fewer than 10 shoers, now more than 200.

“And all those guys need helpers,” he says. “You can come down here and make good money.”

“Back then, we worked for horsemen — those who could tell the difference between a good and bad shoeing. Today, as long as the horse is going along, they have no idea of the type of job it is. Also, veterinarians today are a huge help with sore horse with injections. We had to try to figure out how to make them sound. You had to be thinking all the time and be creative.”

It isn’t uncommon for Gervasio to come across a helper who lacks any horsemanship experience, even the ability to hold a horse. You couldn’t be a horseshoer very long in the '60s without horsemanship.

“It takes years and a lot of horses, and a lot of screw-ups, to learn horsemanship,” he says. Gervasio’s advice for young shoers is to stick with that mentor, don’t leave when you think you are ready. And appreciate how you have it. Often in the '60s, the lead farrier didn’t expect to be a teacher, didn’t pay and at times could be abusive (as judged by today’s standards).

Gervasio admits his views aren’t sugar-coated. For me, I take his views in the spirit they were delivered — things have changed dramatically over 50 years.  There&rsquo s a lesson from this that Gervasio didn’t share, but should be apparent. If you want to have a successful career, you better adapt. Take his points on horsemanship. Gervasio has had to adapt from dealing with a lower level of horsemanship among the owners than from when he first started.  Had he not, he wouldn’t have experienced the success he’s sustained — even having one client for more than 25 years.

You can hear more about Gervasio and his views on shoeing in an upcoming American Farriers Journal podcast.

An Important Part Of A Fine Shoeing Job

What Do You Do When Someone's Spreading Uncalled-For Criticism?

When Teaching Your Son Earns a Suspension From Work