Home / Blogs / From The Desk Of AFJ / Continuing Red’s Legacy

By Jeff Cota posted on October 6, 2016 | Posted in Education, Shoeing

It’s hard to believe that it’s been a year since his passing, yet what’s not so surprising is the indelible mark that Red Renchin left on the farrier industry.

The reminders of just how well he is regarded are simply staggering. Whether it’s an email from a noted hoof-care researcher, an anecdote from a farrier during a clinic or an inquiry about an article he had written, Red remains a frequent topic of conversation — and that’s fine by us. It’s a testament not only to his expansive footcare knowledge, but to his gregarious personality as well.

Red was a farrier for half a century, yet he believed his education was far from complete. The Mequon, Wis., shoer was downright giddy about opportunities to learn from others, whether it was at a hoof-care conference, clinic or riding along with another farrier.

One could always tell when Red was particularly impressed by a lecture or demonstration. Simply put, he looked like he was going to pop.

“Did you hear that?” 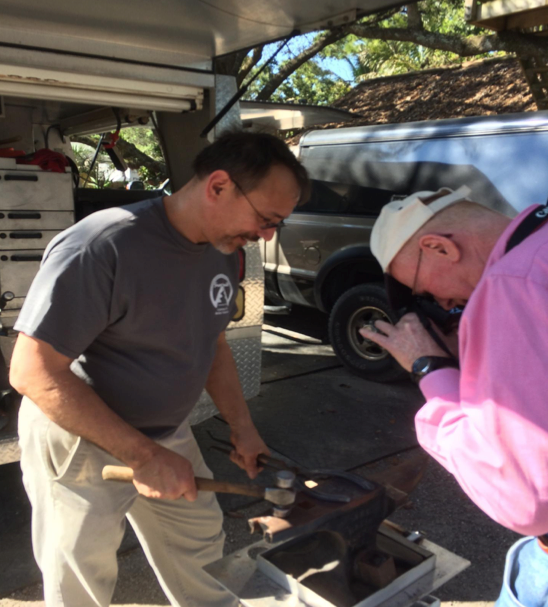 Red Renchin takes a picture of Curtis Burns’ shoe. Red was always particularly amused that Burns’ company is named No Anvil. “Anytime Red saw me at an anvil, he couldn’t wait to take a picture of me at it,” Burns says.

“That was something, wasn’t it?”

Red wasn’t the only one who looked forward to riding shotgun with another farrier. In many cases, it left a lasting impression with the farrier, too. One such farrier is Curtis Burns.

“We happened to sit next to each other at a laminitis conference and we got to talking,” recalls the Wellington, Fla., farrier. “He thought I was the crazy guy with the plastic horseshoes. Eventually, we started a friendship and one of the last articles he wrote was about me.”

Since Red’s passing, AFJ has attended four clinics or conferences in which Burns has lectured. He concludes each presentation with a tribute to Red.

“I always close with a picture of Red,” he told attendees at September’s Northeast Association of Equine Practitioners Symposium in Niagara Falls, N.Y. “Red was one of the first people who actually wrote about me and what I was doing. He was a believer. Red was very important to me. He’s terribly missed, I can tell you that.”

All one has to do is read a June 2012 article that Red wrote to understand that the feeling was mutual.

“Burns is my kind of guy — a smart, outside-the-box thinker, who is constantly working at improving the status quo.”

Burns is definitely that. So was Red.

Red had thousands of unused steel and aluminum horseshoes — from training plates to heart bars — that he had kicking around. Red’s wife Kate will be more than happy to find a new home for them. Just drop her an email to learn more.

How Important Is Continuing Education?