Helping Save A Draft Horse Breed

By Frank Lessiter posted on August 12, 2016 | Posted in Disciplines & Breeds

A few weeks ago, I learned Karene Topp had passed away. She had served for more than 4 decades as secretary/treasurer of the American Cream Draft Horse Association.

I’m sure most of you haven’t heard of Karene. And it's also likely most readers know little about American Cream horses.

I got to know Karene and learned about the breed in the mid-1970s when I wrote the 256-page Horsepower book that dealt with the role of draft horses in North America. Published in 1977 and selling over 120,000 copies, the book featured a close look at how draft horses were still being used and included chapters on the Belgian, Clydesdale, Percheron Shire, Suffolk and Westphalian breeds.

The book also includes a chapter called, “The Breed That Didn’t Make It,” which told the story of the American Cream horses. In 1977, there were only a half dozen of these beautiful creatures left in the United States.

Born sometime between 1900 and 1905, the matriarch of the breed, often referred to as “Old Granny,” was a draft type mare of unknown ancestry with an outstanding rich cream color. As her offspring foaled on central Iowa farms, horsemen realized the old mare continually bred true to her “gold champagne” color. The rich cream color was maintained even when her offspring were mated with other draft horse breeds to improve type and quality. 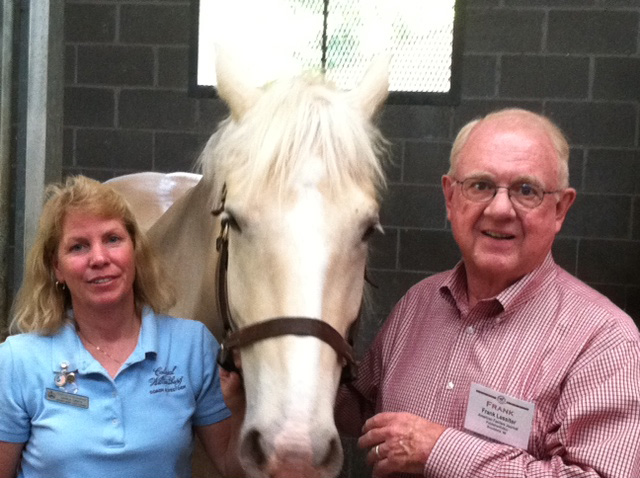 Posing with an American Cream at Virginia’s Colonial Williamsburg are Karene Watson, supervisor of barn operations for coach and livestock, and American Farriers Journal’s Frank Lessiter.

Yet it was around 1935 before any serious efforts were made to develop the cream-coloreds animals into a distinct draft horse breed.

Yet only 196 horses were registered during the first 16 years of association operation. Draft horses were quickly losing their popularity as tractors and mechanization took over the work on millions of American farms.

By the late 1950s, there were only 200 living American Creams owned by 41 breeders. And the demise of the breed was taking place so fast that only two Creams were registered in 1960.

End Of An Era

When I visited with Karene Topp in the mid 1970s, the breed appeared to be on its way out. More than 40 years later, I still remember how depressed she was when talking about the future of the Creams.

As I wrote in Horsepower, she told me, “The demise of the breed is a strange and discouraging situation. They were nice horses and of good quality. They were practical since they weren’t huge. And they were beautiful with that rich cream color and good disposition.

“But they were just a bit too late for the times. They simply came along too late.”

To my amazement, writing about the likely demise of the breed in the book is credited by a number of American Cream enthusiasts with actually helping save the breed. I think they gave me more credit than is deserved, but I’m humbled to have played a minor role in saving the breed. 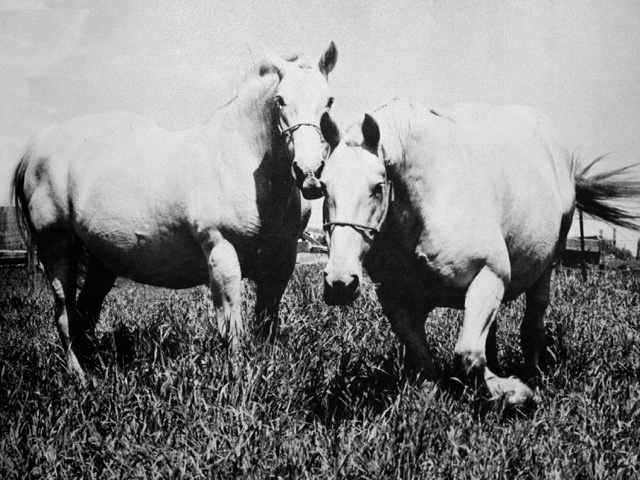 Here’s what happened, as documented in several paragraphs from the group’s Summer 1991 newsletter that described how the breed’s revival took place:

“For 14 years, the association was inactive except for one transfer of ownership. Karene (Topp) almost turned in the charter, but she didn’t and the association is once again strong.

“Karene feels some credit should go to Frank Lessiter who wrote a book called Horsepower, published in 1977. One chapter is dedicated to American Creams.

“From that one chapter, Karene received several letters inquiring about Creams. Along those whose interest was piqued by this article was William Walczak. He came to Hubbard, Iowa, to find out about the association and was the prime mover in having a reorganization meeting, which took place at Dubuque, Iowa, in 1992.”

In 1992, the existing Creams were blood typed by animal geneticists at the University of Kentucky, and for the first time were recognized as a distinct draft horse breed — not just a color.

The breed today has about 110 members, but registration numbers still aren’t great. Some 630 horses have been registered since the reorganization in 1992. The association’s current registry includes 197 full-blooded mares plus 208 geldings and stallions. Another 57 mares and 23 geldings and stallions are involved in an upgrading program.

Classified as a rare breed in many circles, the American Cream is the only draft horse breed developed in the United States still in existence. The Livestock Conservancy and the Equus Survival Trust, two groups involved with protecting rare animal breeds, consider its numbers critical. In addition, American Creams are part of the rare breeds program maintained by the Colonial Williamsburg Foundation in Virginia.

In 1992, Karene Topp retired as secretary/treasurer of the association, a position she had held for 47 years. Among the highlights of her career was being among the first American Cream riders to march in the 1996 Tournament of Roses parade in Pasadena, Calif.

It’s been 40 years since I spent a warm summer afternoon visiting with Karene. I still remember how depressed she seemed while talking about the future of the breed. The good news is that it has succeeded, in part because of her dedication to the breed over nearly 5 decades.

Tapping Into The Draft Horse Market Can Be Rewarding