By their nature, scientists bristle at the notion that anything is otherworldly — particularly in science. Where they refuse to venture, renowned writer Sir Arthur C. Clarke embraced the connection with wide-eyed wonderment.

“Any sufficiently advanced technology is indistinguishable from magic,” wrote the late British author of 2001: A Space Odyssey.

Traditionally, CT and PET scanners are large machines that require the insertion of a prone patient into a short tunnel or doughnut-shaped hole to aid the diagnostic process. Yet, how does one insert a 1,400-pound horse into a human-sized tunnel?

The machine manufacturers that partnered with Penn Vet and UC Davis took two very different approaches to the same problem. 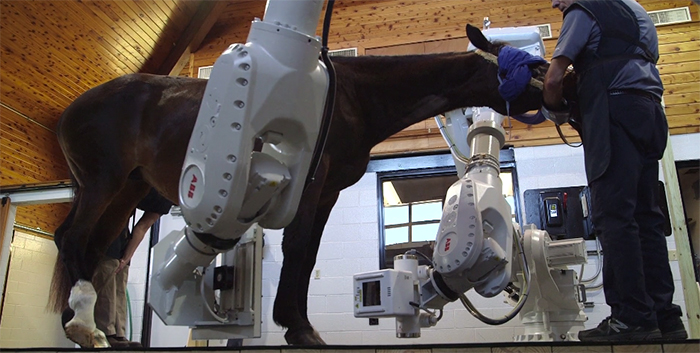 “The reason this is so revolutionary is that the robots can easily move around the horse in any orientation,” explains Barbara Dallap Schaer, medical director at Penn Vet’s New Bolton Center. “We can do the imaging in a patient that is standing and awake. From a clinical standpoint, we will see elements of the horse’s anatomy that we’ve never seen before.”

The robot-powered imager can collect not only typical, 2-dimensional CT images, but also moving images; 3-dimensional images via tomosynthesis; and high-speed radiographs, capturing as many as 16,000 frames per second.

“The end results should be images that look very similar to traditional CT scan images without the risks, expense and extra time required for general anesthesia and more diagnostic utility than conventional radiographs,” says Chris Ryan, a Penn Vet radiologist.

The innovation doesn’t stop there. The hope is to be able to program the robots to capture images of a horse running on a treadmill.

Rather than eliminating the tube, Brain Biosciences simply made it smaller and portable — enabling UC Davis vets and researchers to insert the foot into the scanner.

PET takes imaging to another level. Most imaging techniques identify changes in size, shape or density of structures, while PET reveals changes in tissue before the size or shape modifies. In addition, when morphological changes occur, PET can determine whether they remain active.

“In practicality, that means two things,” says Mathieu Spriet, a UC Davis veterinary radiologist. “One, PET can detect lesions that other advanced modalities do not identify, and two, it can tell us if a lesion — identified with another modality — is a significant injury or not.”

“Preliminary data suggests,” Spriet says, “that PET will be the next big revolution in equine imaging since the development of MRI.”

UC Davis will be launching research studies this summer to confirm these findings, as well as evaluating soft tissue lesions — including the involvement of laminitis and tendons.

Imagine what the equine footcare industry might learn from these technological advancements. The possibilities are magical.

Getting Better Results During the Daily Grind