Home / Blogs / From The Desk Of AFJ / Misdirected Anger in Footcare 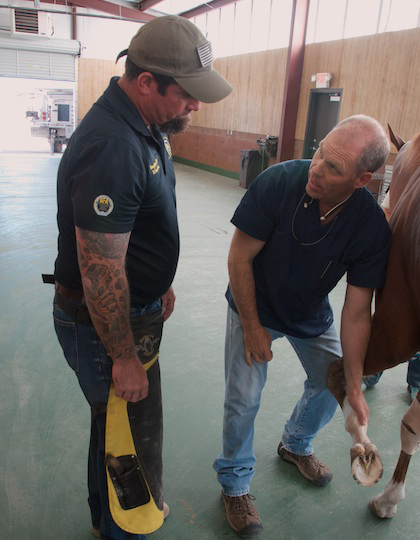 I just returned home after spending a couple of days riding with El Paso, Texas, farrier Doug Hogue. This experience with the 10-year shoer will be featured in the January/February 2015 issue of American Farriers Journal.

This was a great trip, that saw a wide range of farrier topics: trimming methods, building tools, making shoes, consultations, lameness issues and more. We spent part of a day, as Hogue typically does each week, working with Dr. Paul Jenson at the veterinarians Sunland Park, N.M., clinic. They work on a variety of lameness issues on horses ranging from backyard ponies to Thoroughbreds that run on the nearby racetrack.

As the farrier who conducts 90% of the work at this clinic, Hogue explained he sometimes finds local farriers who are angered because another farrier has temporarily taken over the horse at the clinic. I disagree with the opinion, but I understand why that reaction sometimes occurs. Those farriers react as such when they mistake a farrier carrying out a vet’s script as an unwarranted critique. That’s vanity and pride manifested in unprofessional reactions. Furthermore, it is a missed opportunity to learn and a failure to recognize a deficiency may exist in one’s own work that may have caused or contributed to the problem. Not to mention, what’s more important… the health of the horse or your pride?

A more curious reaction Hogue also told me about is when another farrier is mad because the client didn’t tell him or her that the horse went to the clinic. Obviously this is a case of misdirected anger. And it is a reaction that misses the point entirely. Hogue sums it up best that the other farrier should, “take a step back and realize that there is a problem is in the relationship with that client … they don’t feel there was a need to let that farrier know there was a problem.”

Hogue says the farrier as the cause of this problem is avoidable by staying engaged with the owner. He lets the client know he wants to know as soon as they believe there is an issue with the horse. When an owner asks him a question at the barn, Hogue takes his apron off, makes eye contact and listens to what they have to say. He addresses their concerns by answering in a thorough, understandable manner.

All of this is quality customer service. More importantly, this level of engagement lets the owners know you care about the horse and their business. And it makes finding out about visits to the clinic after the fact a rarity.

7 Major Footcare Concerns Among Horse Owners | How Effective is Social Media in Marketing Your Footcare Business?

Advancing The Art And Science Of Footcare In 2014