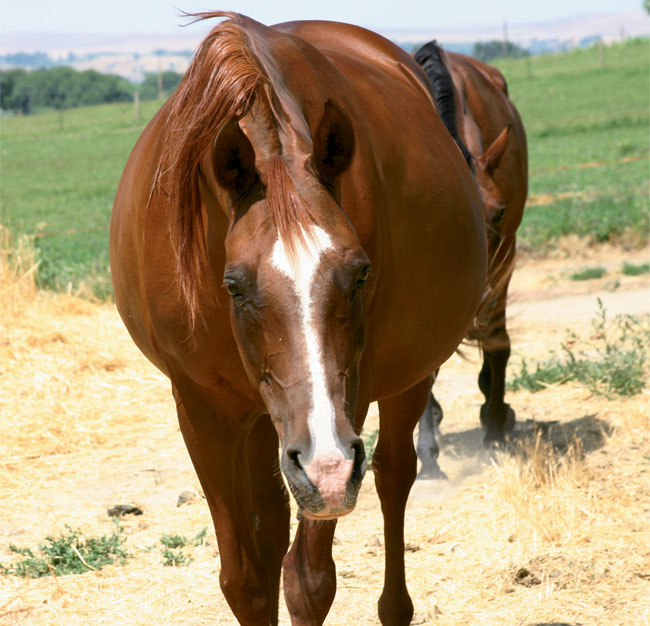 By Christy West posted on May 1, 2008 | Posted in Diseases, Lamenesses

Does pregnancy put a mare at increased risk of laminitis?

Some broodmares are assigned to that role at least in part because they have already have lameness issues. Those issues may make a mare more susceptible to laminitis.

A pregnant mare with laminitis can be one of the toughest cases to treat. All that extra body weight late in the game, along with an owner wanting to keep her alive to get “just one more foal” are the proverbial rock and hard place between which a farrier is often stuck, trying to perform miracles.

As it turns out, extra body weight might not be the only factor making that pregnant mare a difficult case. At the recent International Conference on Equine Laminitis and Diseases of the Foot, held Nov. 2-4 in Palm Beach, Fla., a discussion on this topic was presented by Philip Johnson, BVSc, MS, MRCVS, Dipl. ECEIM, ACVIM, professor of veterinary medicine and surgery at the University of Missouri. He specifically addressed laminitis in mares who are still pregnant, not laminitis occurring as a result of retained placenta, postpartum endometritis, etc.

For the most part, he began, there’s very little in the literature on laminitis in pregnant mares. But there are trends to consider, such as age. Many broodmares are used in competition, and then are assigned to the broodmare role as older individuals.

Older horses are known to be at greater risk for diseases such as equine metabolic syndrome and pituitary pars intermedia dysfunction, also called Cushing’s disease. These diseases are known to carry a…

Laminitis Risk Can Rise In Fall, Too