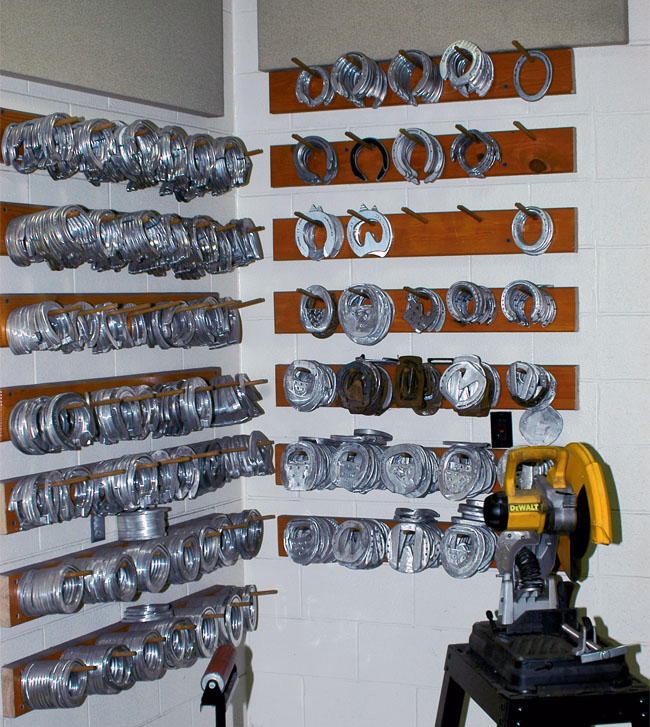 By Pat Tearney posted on May 1, 2008 | Posted in Education, Therapeutic Shoeing

Farriers at the Rood & Riddle Podiatry Shop spend a big part of their day working on shoes for various applications.

Our “Shoeing For A Living Days” rarely start at noon. But a couple of cancellations at the Podiatry Shop at Rood & Riddle Equine Hospital in Lexington, Ky., where I’d been scheduled to spend the day, led to a phone message at my hotel suggesting I wait until then to make my appearance.

I was to find that didn’t mean people were exactly standing around at the busy podiatry practice. Shop farriers were at work making shoes for various applications. A farrier who formerly worked at the clinic dropped in to get in a little practice for the upcoming competition at the American Farrier’s Association convention that he was in town for. Staff veterinarians continued to climb into their trucks and drive off through the Kentucky countryside for barn calls.

The podiatry clinic has come a long way in 6 years. Back in 2002, I joined Scott Morrison, the equine veterinarian and farrier who heads up the podiatry practice at Rood & Riddle, for a Shoeing For A Living article (See American Farriers Journal, May/June, 2002, Pages 16 to 24).

The podiatry practice was still in its infancy then. Morrison spent most of his days on the road making barn calls. The farrier shop — such as it was — was located in a shed that not long before had housed lawn mowers and other equipment used to maintain…

Fire Up That Forge