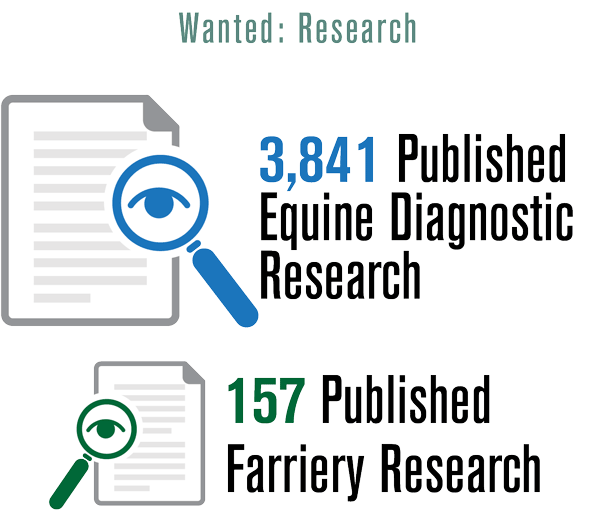 By Jeff Cota posted on January 6, 2018 | Posted in Education

Pictured Above: Renate Weller, professor in comparative imaging and biomechanics at the Royal Veterinary College in London, England, found that in 2014 only 157 peer-reviewed papers were published in farriery compared to 3,841 in the field of equine diagnostic research.

How much research is being published each year that focuses on the equine foot?

Given the importance and interest, one might believe that there’s quite a bit that’s being generated. Yet, that’s not necessarily accurate, Renate Weller says.

The professor in comparative imaging and biomechanics at the Royal Veterinary College (RVC) in London, England, conducted a meta analysis in 2014 in which she looked at the number of peer-reviewed papers have been published in farriery. At that time, a total of 157 papers had been published.

By way of comparison, published re­search focusing on equine diagnostic research during the same period of time was at 3,841 and steadily rising.

“We are seeing 80 to 100 new publications a year in this field,” Weller told attendees during an American Farriers Journal webinar. “Whereas, in the farrier world, we are seeing between two and a maximum of five a year.”

Why the discrepancy? Weller be­­lieves one reason is a lack of research skills.

“Every farrier I know needs the right tools and skills to do their job,” she says. “That’s exactly the same when doing research. It’s not something we’re born with. It’s skills and knowledge one has to acquire through studying and practice.”

The combination of the…

Bringing The Hoof To Scientific Research

Farriers Research Each Day, Why Not Document It?