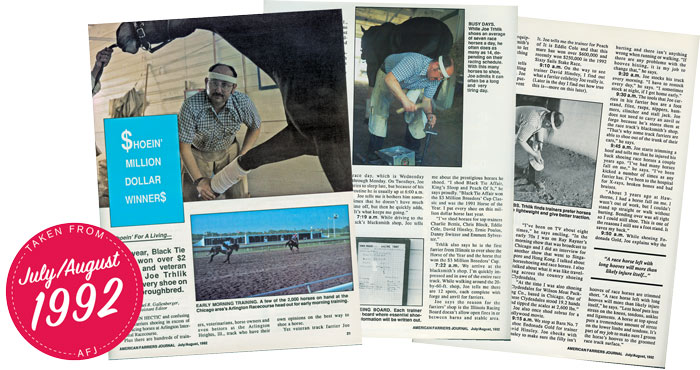 From the AFJ Archives: January/February 2018

July/August 1992 featured the second edition of “Shoeing For A Living.” This was a new concept for American Farriers Journal. The premise of this article is to follow a farrier around for a day and document his or her approach to the job. It took some time for this series to find its feet, but eventually has.

This article featured then-Illinois shoer Joe Trhlik. In 1992, Joe was one of about 35 farriers working on nearly 2,000 head at Arlington Park in Arlington Heights, Ill. Trhlik also worked on a variety of other disciplines. A 1965 graduate of Hank McEwan’s Potterville Horseshoeing School in California, Trhlik obtained his track license in 1971, but didn’t start shoeing at Arlington until 1977.

The wisdom shared by Trhlik in the article centered on staying out of the horse’s way.

“There is always a rule of the track that says you can always slow a horse down, but you can’t necessarily make it faster.”

Read the Original Article at americanfarriers.com/0118

Premium content is for our Digital-only and Premium subscribers. A Print-only subscription doesn't qualify. Please purchase/upgrade a subscription with the Digital product to get access to all American Farriers Journal content and archives online.
KEYWORDS arlington Joe Trhlik plate toe grabs track

Joe Trhlik is a farrier based in Rio Verde, Ariz., who still likes to shoe at the age of 73.

From the AFJ Archives: July/August 2018