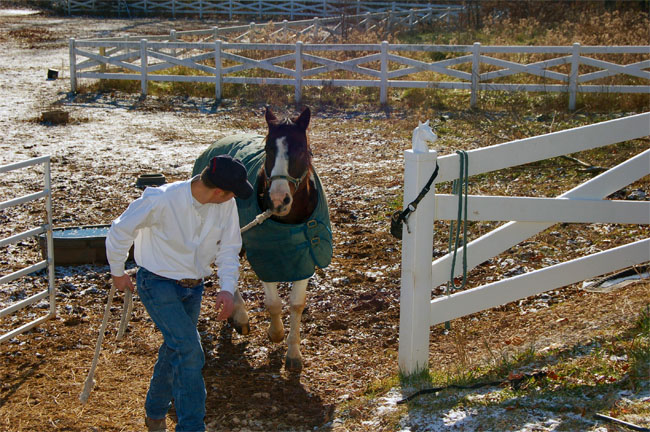 Pete Rosciglione leads a horse in from his paddock for shoeing on a cold Missouri morning in December.

Sometime while I was in the air between Milwaukee and St. Louis, my planned Shoeing For A Living day changed dramatically.

That’s when Pete Rosciglione, the Defiance, Mo., farrier who’d agreed to share his shoeing day with me found out most of the horses he’d planned to work on that day would be spending it in another state.

That kind of thing happens to farriers. Despite what a lot of horse owners might think, it’s not always the farrier that doesn’t show up when he’s expected. During the years that I’ve been doing these stories, I’ve more than once been in the company of a shoer who pulled up to a scheduled barn and found the horse had been taken to a show, a veterinary clinic or out for a long trail ride — without it crossing the mind of the owner or trainer to maybe give the farrier a quick jingle to let them know their services wouldn’t be needed. (No doubt, some horse owners who have been “stood up” by their shoers might read this and think “turnabout is fair play.”)

And at least Rosciglione had gotten a phone call about this cancellation — just not in time to contact me so that the two of us might have shifted our plans.

Everything I Ever Needed To Know About Working With Grooms...