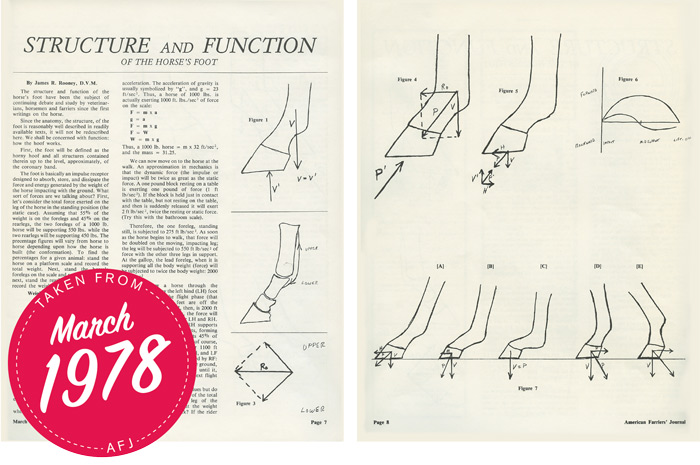 From The AFJ Archives: September/October 2017

March 1978 — “Structure And Function Of The Horse’s Foot”

Through online search engines, farriers today are able to access information on peer-reviewed research papers. While still limited to farriers in the field, the access was even more restrictive in the 1970s.

So it was monumental when the works of Dr. James Rooney began appearing in the American Farriers Journal at that time. The peer-reviewed paper “Structure And Function Of The Horse’s Foot,” was the first paper he republished in the magazine (the following paper was “The Shape Of The Horse’s Hoof,” which came in the September 1978 issue).

This was an important paper for farriers to read, as it was an overview of the forces involved with the horse’s foot and limb and introduced many farriers to these concepts.

Rooney didn’t discuss the anatomy and structures, pointing that textbooks available readily covered these. Instead he focused on the function and how the hoof works.

He first looked at the foot as an impulse receptor, explaining what forces exerted on it in the static and dynamic phases.

He then examined the horse at galloping stride, giving a general view of the total forces that each leg would experience. Rooney’s sketches help the reader better understand the applications through visualization.

Decades later, we collected several of Rooney’s papers and published them in the report, “Demystifying The Secrets Of Biomechanics and Lameness,” which is available on the AFJ website.

Read the original article at americanfarriers.com/0917

I will first say that I love this paper by Dr… Dr. Renate Weller, PhD, MRCVS, FHEA is professor in Comparative Imaging and Biomechanics at the Royal Veterinary College in England.

From the AFJ Archives: September/October 2018

From The AFJ Archives: November 2017

From the AFJ Archives: December 2017

45 Memorable Articles from the History of American Farriers Journal