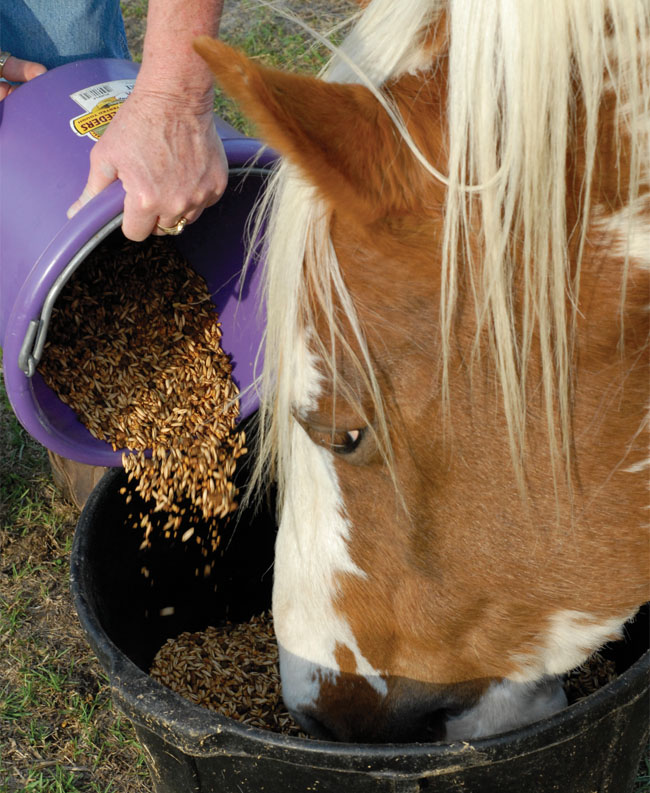 By Karen Briggs posted on September 1, 2008 | Posted in Nutrition

There are pros and cons to every available grain format. Let’s weigh the options

Grains that have been crimped, rolled, steamed or otherwise processed must be stored for much shorter periods than whole grains.

It’s 5 p.m. and up and down the aisle of a large boarding stable, the nickering, rumbling and pawing begins. What’s the cause of the excitement?

Nothing more than a metal scoop digging into a bin of grain, a sound that tips off every equine resident that it’s dinner time. Hay seldom receives this sort of reception, as it’s grain that horses really relish.

But just because horses love grain doesn’t mean it’s an essential part of the diet. In the wild, horses encounter grain only as an occasional plant seed head — certainly never in the volumes found in their feed buckets in a domestic scenario. While their teeth can grind grain seeds quite efficiently, their digestive systems are poorly equipped to deal with the low-fiber, high-carbohydrate wallop that grain delivers. The result is a much higher incidence of colic among grain-fed horses compared with those fed only forages.

As AFJ readers know, consuming excess quantities of any grain can result in dire consequences, including life-threatening colic and founder. Unfortunately, equines have no dietary wisdom when it comes to grain. Given the opportunity to gorge themselves (such as when the feed room door is left open), they can conceivably eat themselves to death.

Because of this, grain should never be fed free choice or left so that it is accessible to horses outside of allotted amounts at mealtime. Except…