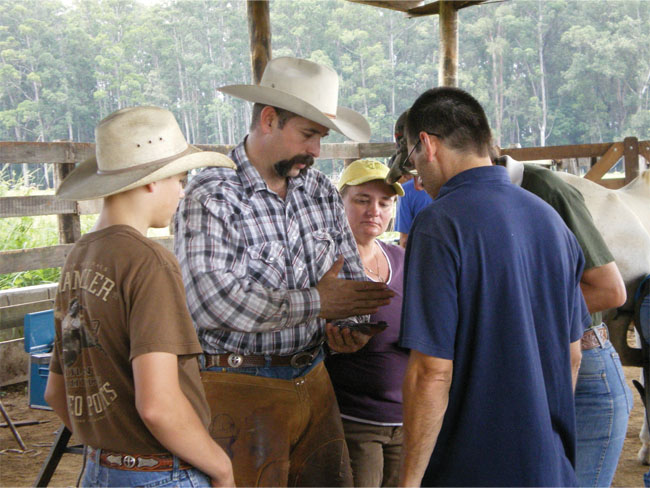 Birth of a National Certification Program for Brazil

By Chris Gregory posted on December 1, 2008 | Posted in Education

Cody, Chris and Kelly Gregory, left to right, work with a member of the Association of Brazilian Fariers.

In November 2007, my son, Cody, and I did a clinic in Soracaba, Brazil, at the Universidade Do Cavalo (The Horse University).

The UC is a privately owned school that educates potential horse professionals in every aspect of the equine industry. It is run by Aluisio Marins, a veterinarian and well-known horseman. He teaches a variety of classes, from jumping and colt starting to barn maintenance and equine husbandry. The school has hundreds of students from many places. The UC also offers clinics in various disciplines. I was lucky enough to be the clinician for the farrier clinic in 2007.

Out of that clinic came many discussions about creating an association for Brazilian farriers. It is not as easy to start an association in Brazil as it would be in the United States. Several people had to do quite a bit of preparation and get approval from the Brazilian government officials who oversee that sort of thing.

Flavio Souza and Fabio Furquim were the farriers who did most of the legwork. Both men have competed in the U.S. or Canada and are very talented and knowledgeable farriers. In fact, Souza was the top finisher in this year’s Calgary Mail-In Shoe Exercise that is sponsored by American Farriers Journal and the World Championship Blacksmith’s Competition.

Calgary Mail-In Choice Is A Useful Shoe For Your Arsenal