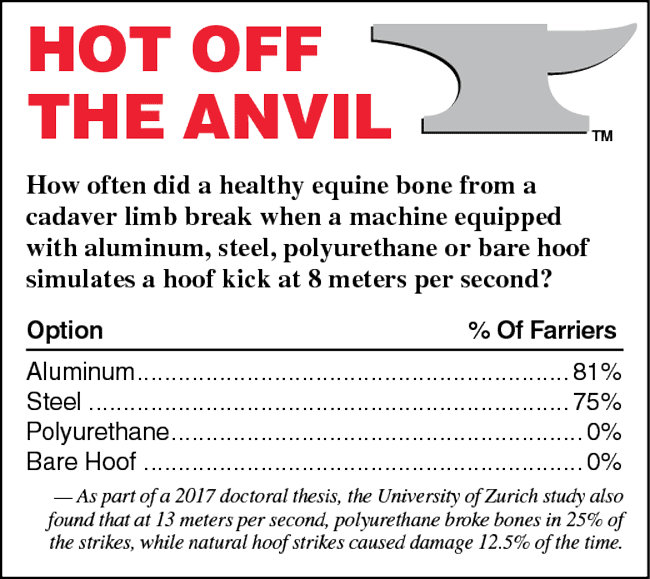 Charlie Sands has accomplished what’s believed to be a first — winning best shod honors at the Random Health Grand National and Mitsubishi Motors Badminton Horse Trials within a 12-month period, according to Horse & Hound.

Sands, who hails from Bourton-on-the-Water, Glou­cester­shire, England, completed the unique double April 8 at Aintree while shoeing Drop Out Joe. He won the best-shod prize at Badminton in May 2016 while tending to Allercombe Ellie, which was ridden by his girlfriend Izzy Taylor.

“Both horses were wearing handmade shoes,” Sands told Horse & Hound. “I put tool and fullered aluminum front shoes, which I have spent months practicing making, on Drop Out Joe. He also has lateral extensions on his hinds to help support him. Allercombe Ellie toes-in badly, so I made lateral extensions for her in front. It’s a real honor to win both competitions, and a nice recognition of what we do.”

Life Data Labs took a new measure to increase the company’s environmental sustainability by activating the company’s new field of solar panels in early spring. The panels can fully power the manufacturing operations of the Cherokee, Ala.,-based plant whenever the sun is out.

The solar farm takes up an acre at the company headquarters, consisting of 855 solar panels measuring 3 feet wide by nearly 6 feet tall. The system has a rating of 282 kilowatts for direct electrical current, 236 kilowatts for alternating current.