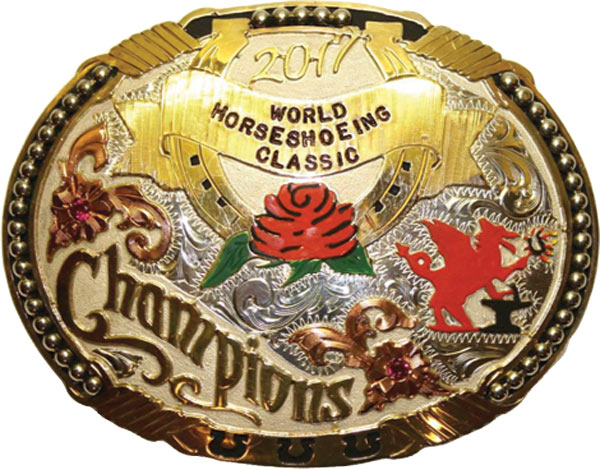 It Came Down To A Half-Point

After winning the World Horseshoeing Classic by a slim margin, Team GB credits team efficiency and attitude for rally

Over a few years, the World Horseshoeing Classic (WHC) has grown from a start-up competition to one of the most well regarded international contests in farriery. Its four-member team, three-discipline approach with a repeating format has helped distinguish it from other events in the states.

The most recent WHC, held in early March, held up those standards. Hundreds of attendees over the 3-day event saw Team GB come from behind on the final day to capture the overall title and take home the buckles.

Talking To The Champs From Great Britain

Also champions from 2016, Team GB is made up of four well known competitors from the United Kingdom: Steven Beane, Darren Bazin, Nigel Fennell and Derek Gardner. Beane, a five-time champion of the Calgary Stampede Blacksmiths Competition, also was awarded the best shod foot from the WHC.

Fennell admits things seemed dire being down by more than 11 points at the end of the second day. Convinced that evening that the team couldn’t close the gap, he credits Beane as the motivator for the third day.

“He’s a driving force,” Fennell says. “If he sees a window of chance, he believes it can be done. That motivated the rest of us.”

In a team competition, it helps when the members of the individual team operate like one machine. Team GB has an advantage by having competed for many years as individuals against each other, as well as a team in other competitions. Familiarity helps build a team chemistry and…