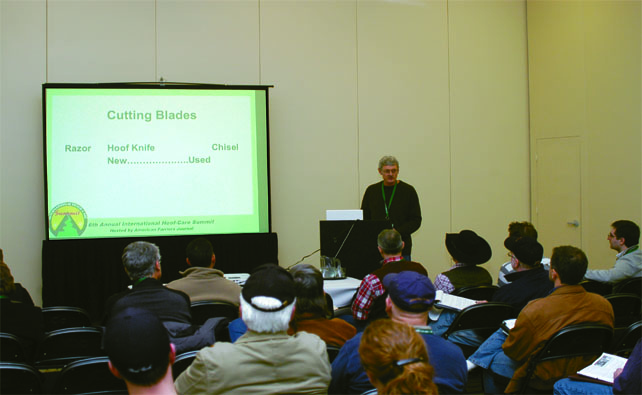 Sharp Advice From a Craftsman

By Jeremy McGovern posted on April 1, 2009 | Posted in Equipment

Having made hundreds of hoof knives by hand, Frank Ringel stresses the keys to keeping these tools sharp.

“The hoof knife is at the top of the list of hardest-working knives.” That’s what Frank Ringel told those attending his clinic on sharpening hoof knives at the 2009 International Hoof-Care Summit (IHCS) in Cincinnati, Ohio. As owner of Ringel Custom Knives in Florence, Mont., he should know.

Besides handcrafting every blade he sells, Ringel has worked as a farrier, so he understands the beating that a horse’s foot can put on a knife. “The hoof is not a friendly environment for keeping a knife sharp,” says Ringel. Pulling from his expertise as a craftsman and hoof-care professional, he shared his insight on knife sharpening with IHCS attendees.

A sharp knife benefits the farrier in several ways. Most noticeably, the sharper the knife, the better it performs. If your blade operates at a top level, that means less time for you working under the horse.

In addition, a sharp knife eases the pressure placed on a farrier’s hand, wrist and elbow. It may not be noticeable at first, but the wear adds up over time, claims Ringel.

With a sharp blade, you will get a cleaner cut, resulting in a good job. Your clients may notice the difference.

A sharper knife is a safer knife. “You don’t have to fight the hoof,” says Ringel. “When you are working on an animal you can’t get under, like a pony, you are probably using…

Frankly Speaking: Farrier Business Advice from a Generation Ago

A Source of Sound Hoof-Care Advice