By Amy Johnson posted on March 6, 2017 | Posted in Education

Three farriers were honored at the 2017 International Hoof-Care Summit for making remarkable progress in their footcare careers just 3 years out of shoeing school.

In 2009, American Farriers Journal joined six industry suppliers to create the Rising Shoeing Star award to be given out each year at the International Hoof-Care Summit. This award is presented to three farriers who have made incredible professional progress within 3 years of graduation from farrier school.

Each winner received a plaque, a 1-year subscription to American Farriers Journal, the AFJ “Kitchen Sink” package (a footcare library with over 3,500 pages of reference material) and free registration to the Summit.

In addition, the first-place winner receives $1,000 and the two runners-up each receive $500. The schools that produced the three winners also received plaques and copies of the Kitchen Sink package for use at their schools.

The farriers honored at this year’s Summit were Brody White of Seguin, Texas, Jayce Fulbright of Hobson, Mont., and Ellie Pugh, of Sheerness, Kent, U.K. 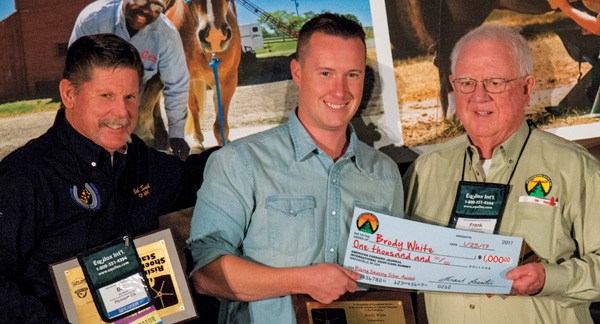 “I chose PCHS because a friend of mine, Adam Collen, told me about Bob’s school. I did some research, talked to Bob and it seemed like…