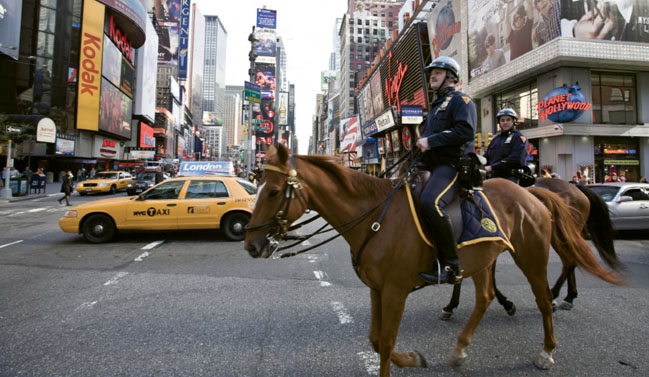 Hoof Care for the Force

By Pat Tearney posted on September 1, 2009 | Posted in Shoeing

Shoeing horses for the New York City Police Department’s mounted units was an eye-opening experience for East Islip, N.Y., farrier Jerry Trapani. He shared some of the insights he’s learned in several decades on the job with attendees at the International Hoof-Care Summit in Cincinnati earlier this year.

Trapani, who has been shoeing horses since 1963, was one of the farriers for the NYPD for many years.

Trapani told his listeners that many of the lessons he’s learned have a much broader application than just to police horses. They’re particularly apt for larger horses, horses that work on hard, paved surfaces and those who spend the majority of their time in stalls.

“Roads can be really hard on hooves,” says Trapani. “The feet of horses that do a lot of work on hard surfaces lose the ability to rebound and come back.”

It’s even worse for horses who when not working, spend their “off time” strictly in stalls.

“They fare the worst,” says Trapani. “There aren’t a lot of paddocks left in Manhattan anymore.”

To deal with the problem, the NYPD rotates its horses between the outer boroughs and Manhattan, according to Trapani. There is some turnout available for horses…

Learning to Solve the Formula for High-Level Hoof Care