By Heather Smith Thomas posted on September 1, 2009 | Posted in Education

The Wounded Warriors Project is a program that attempts to help military personnel who have suffered wounds or mishaps make the transition back to civilian life.

A variety of training is available to these soldiers in different parts of the country, including a course in farrier science being taught at Colorado Springs, Colo.

The pilot program involves eight soldiers from Fort Carson. They began learning horseshoeing skills in June and will earn a certificate in farrier science at the end of the course in October.

Jim Becka, a veteran farrier who originally worked in Illinois, is teaching the program, working through the farrier science program at Pikes Peak Community College. The course is offered as part of AvoTech (Army Vocational Technical Program).

The Air Force Academy’s Equestrian Center is providing the space.

The soldiers involved in this course all have an interest in horses and a desire to “do something different” when they return to civilian life. 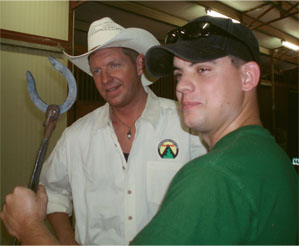 Becka, who relocated to Colorado, has a background well suited to the job.

“I was an instructor for the OBC (Officer Basic Course) in 1985-86 so I already had some experience teaching military personnel,” he says. “But it wasn’t until I…

Program Enjoyed By Mentor And Student

Teaching Your Horse To Stand For The Farrier