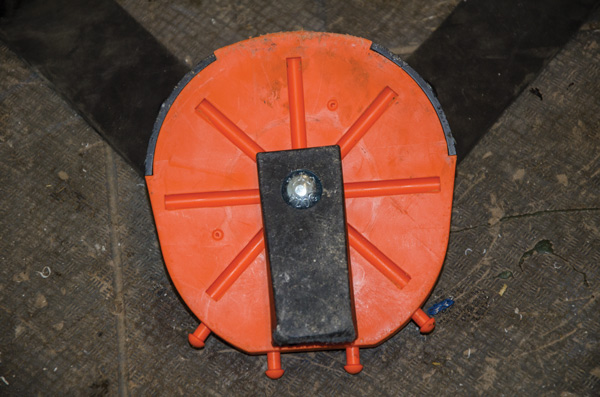 He was taken off a slaughter truck about 10 years ago and bought by James Work, a small animal veterinarian in Greenfield, Wis.

“He trips a lot and his head bobs when running,” says his wife Parvin. “I suspect that’s why he was on the slaughter truck — they couldn’t keep him sound.”

Now in his late teens, Pal’s job is to ride trails. When he’s sound, he’s a good one, too.

“We saddle him up and he’s just as calm as can be,” Parvin says. “My husband will turn around to talk to whomever is riding behind him. He doesn’t even have to watch the trail. Pal just keeps walking. Nothing spooks him.”

The Works have had difficulty discovering the cause of the lameness in Pal’s left front foot. About 12 weeks ago, they brought in Evansville, Wis., farrier Eddy Strommen to take a crack at figuring out what’s wrong with Pal.

KrosschecK Leverage Testing Device uses a wedging system that allows a horse to determine whether it will load or unload specific areas of its foot.

Indications such as deformation and bruising can suggest how a horse is compensating for pain.

Since frozen ground will not allow the foot to sink, Eddy Strommen trims the hoof to unload the lateral toe and leaves all the material on the medial side.

Diagnosing Issues With The Navicular Apparatus