Trimming Minis Is No Small Deal

By Lynda Layne posted on September 1, 2009 | Posted in Trimming

Frank Lupton says miniature horses aren’t just scaled down versions of their full-sized counterparts, especially where the feet are concerned.

“You have to think about these miniatures almost opposite of full-sized horses,” says the Oklahoma City, Okla., farrier, owner and trainer. “Worry less about the toe and more about the heel.” Lupton acknowledges this reverse mindset goes against the grain of what most farriers have been taught.

Lupton learned most of what he knows about farriery work 40 years ago from cattle ranchers and stock horse people in Idaho. And he has a long history of trimming and shoeing full-sized horses.

But 17 years ago, he and his wife purchased their first miniature, and their herd grew from there. He began trimming their miniatures as well as those owned by others. “I have worked on countless world champion and top ten miniature horses,” he says. But at age 66, he’s ceased doing farrier work other than on his own animals and concentrates on training and showing the tiny horses.

For a farrier working on miniatures, Lupton says it’s all about trimming, as the registry associations don’t allow shoes. Unique hoof characteristics explain why it might be hard for minis to hold a shoe and why they can’t be trimmed the same as their larger counterparts. 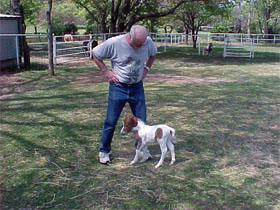 Frank Lupton starts trimming baby miniatures when they’re about 2 weeks old and will remove some toe to help them stand up straighter. After the initial trim, he touches them up about once a month.

Trimming A Horse With A Long-Toed, Pancake-Shaped Foot