By Ray Legel posted on September 1, 2000 | Posted in Diseases

In 26 years of shoeing I’ve run across this situation before, but not to this extreme. Hopefully this story will help someone else in the future.

This particular paint horse simply grew too fast as a yearling—I was told that his front fetlock joints would cock ahead, then rock back to the normal position. He was very well bred and the owners still wanted him as a stud prospect. On a friend’s advice, the owner put the colt out to pasture for the summer with other horses on the assumption that they would keep him moving and the exercise would straighten the joint.

After 2 months, the left front was about the same as when he was turned out, but the right front

was cocked forward and wouldn’t flex back.

They took the colt to a veterinary clinic and were given the choice to put him down or try surgery. The owners opted to have the subcarpal check ligament severed, which didn’t work. A week later, they had

the suspensory ligament severed. Again, there was no change (Figure 1).

A week after this visit, they brought the horse back to the clinic and were told they should put him down, but if they liked they could call me to see if I had any ideas.

If All Else Fails... 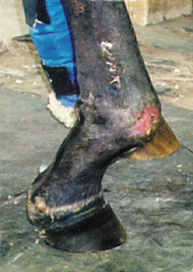 The horse arrived at my shop with the leg…