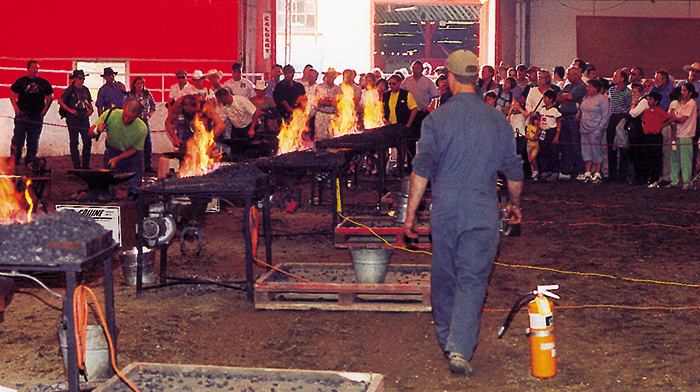 By Frank Lessiter posted on September 1, 2000 | Posted in Shoeing

While in Calgary earlier this summer for the World Championship Blacksmiths’ Competition (WCBC), my wife and I toured the city’s Olympic Park. This is where the ski jumping, bobsledding and luge competitions were held during the 1988 Winter Olympics.

Catching our attention was an exhibit that spelled out what it takes to be an Olympian athlete:

I quickly realized these Olympian standards also apply perfectly to the competitors in the worldwide forging and shoeing competition at the Calgary Stampede. As with Olympic athletes, these winning farriers represent the best of their craft in the world and rely on these same five essential Olympic success traits.

First organized in 1980 with the help of the Pratt family, this year’s 21st annual WCBC contest drew 47 contestants from 15 countries. Thanks to support from the Mustad Hoofcare Group, this event is recognized around the world as the “Olympics Of Blacksmithing.”

Nearly half the contestants were competing in Calgary for the first time. Veteran farriers who’ve competed as many as 15 times in Calgary were also on hand.

Even if you never decide to compete in Calgary, taking…

End Of An Era At Calgary