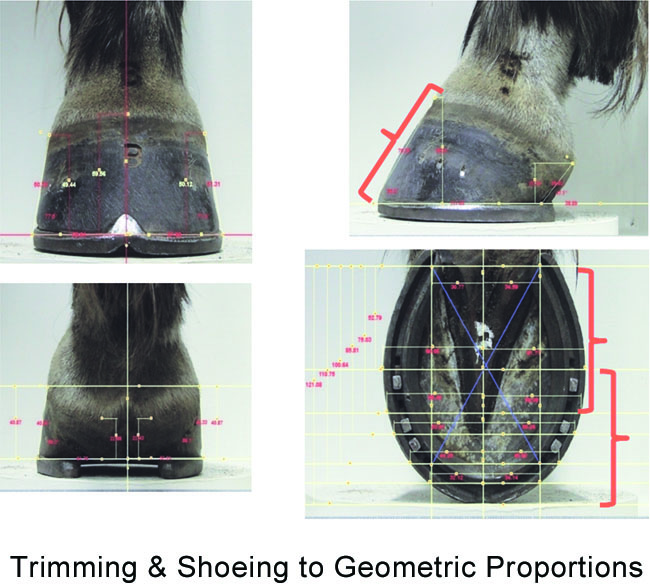 The aim of this experiment was to establish a trimming protocol that could be used to achieve static and dynamic foot balance. We hoped to achieve this trim by using anatomical reference points to overlay an imaginary geometrical guide to obtain static and dynamic balance that would achieve the optimum structural performance for the hoof capsule. The geometric reference points would be based on the research of David Duckett.

We designed an experiment we hoped would either prove or disprove some widely held beliefs on trimming methods. Within the experiment, the group was split into various specialist studies which would concentrate on small but relevant points of the overall experiment, including:

Within the research, this portion was to collect and analyze 25 solar views from cadaver limbs, measure these views using the Ontrack analysis software program, then mathematically define these views into defined shape groups.

All these shapes of feet were lateral view, from the central axis of the frog dorsopalmar. All feet were plotted with X and Y coordinates taken from the dorsal aspect of the frog.

Twenty-five cadaver fore limbs were cut off above the carpus to preserve suspensory attachments. The feet were then trimmed using standard shoeing tools to the trimming protocol as laid out below.

Hoof-Care Highlights: The Week of July 3