Edward Martin... The Man And His Legacy

By Jean Meneley posted on May 1, 2009 | Posted in Business Practices

This Scottish farrier’s work ethic, demand for excellence and love of life, friends and poetry will live on after his recent death

This Scottish farrier’s work ethic, demand for excellence and love of life, friends and poetry will live on after his recent death

I f you are a farrier anywhere in North America, your life and how you work has been dramatically affected by Edward Martin of Closeburn, Scotland. Even if you’ve never heard of the man, his influence on farriers worldwide is a mark that will remain forever.

Born in a small village in the southwest of Scotland on Oct. 2, 1925, he was the second of 10 children and the latest in a long line to bear the name Edward Martin. His great-grandfather was a blacksmith in the classic “journeyman” tradition, who had traveled from England to set up his shop in Closeburn.

Because the train line was being built nearby, he was able to contract some of the company’s work. This and marriage into the local blacksmith’s family ensured his business got a good start.

From here sprang a long line of blacksmiths, each generation with at least one Edward Martin, and usually with at least two family members working in the family shop together.

Like most young members born into a blacksmithing family, Edward spent most of his spare time helping out in the “auld smitty” where his grandfather, father and uncle worked. As was the tradition of the time, he worked his way through an apprenticeship in this shop. 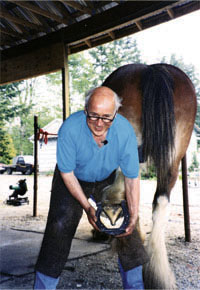 I just want to be a blacksmith like my father...

Edward excelled in his studies at Wallace…

Who Learns the Most - the Apprentice? Or the Mentor?