It may seem that the 2001 American Farrier’s Association (AFA) convention just ended, but it’s not too early to start thinking about the forging contests for the 2002 convention scheduled for Lexington, Ky., March 6 to 9.

Myron McLane, chairman of the AFA Rules Committee, emphasizes that all contestants must wear safety glasses during the 2002 competition. Anyone not doing so will be subject to disqualification.

“Contestants have a whole year to go out and find a pair of safety glasses that they are comfortable with,” McLane says.

McLane notes that safety glasses had been provided for contestants during the 2001 competition in Kansas City, but some contestants complained that they could not see well while wearing them.

Judges for the 2002 competition will be Derek T. Gardner of Penrith, Cumbria, England; Jason Smith of Valley Springs, Calif.; and Craig Trnka of Edgewood, N.M.

Here is a description of the shoes that have been selected for the 2002 contest. 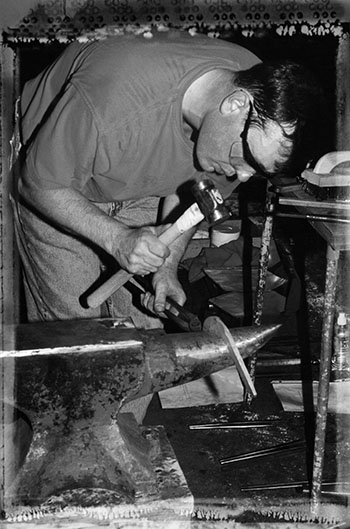 EYE PROTECTION: All competitors in the 2002 American Farrierʼs Association convention competition will be required to wear safety glasses, as Steven Muir of Johnstown, Ohio, did at the 2001 competition in Kansas City.