By Michael Austin posted on September 1, 2002 | Posted in Forging

Decided by one point, the World Championship Blacksmiths’ Competition held in Calgary from July 5 to 8, came down to a battle between Darren Bazin, Kettering, England, and Austin Edens, Graham, Texas.

In the end, it was Bazin edging out Edens by the slimmest of margins.  Mark Milster, Dibble, Okla., last year’s champion placed third while Bill Poor of Abilene, Texas claimed fourth and Craig Trnka, Edgewood, N.M., who won the 1999 title, rounded out the first five finishers.

“It feels super,” says Bazin, who also won the title in 2000. “It’s an incredible feeling. It’s just as good as the first time.”

This title had been a long time in the making as Bazin has been competing in blacksmithing events for 12 years and has been coming to the World Championship Blacksmiths’ Competition for 8 years. He received a $10,000 check from Mustad and St. Croix Forge, a handmade silver buckle designed by Dori Westin and the Jay Contway bronze trophy.

Almost Too Close To Call

While Bazin, 31, may have returned to England with the title, he had some fierce competition from the four American competitors who followed him in the final results. 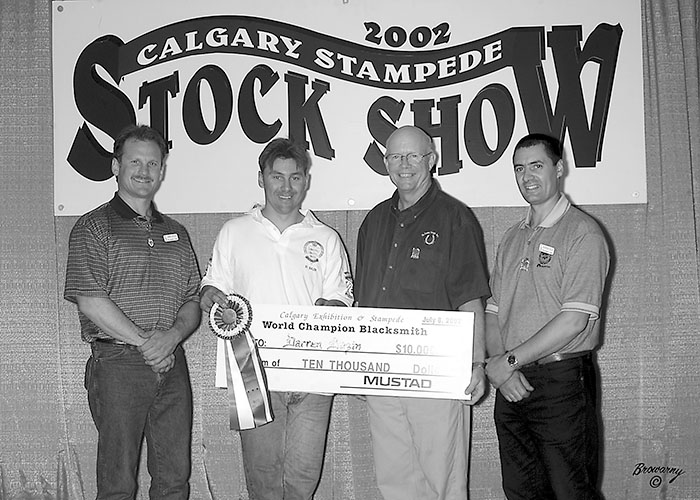 Premium content is for our Digital-only and Premium subscribers. A Print-only subscription doesn't qualify. Please purchase/upgrade a subscription with the Digital product to get access to all American Farriers Journal content and archives online.
KEYWORDS Blacksmiths’ Competition calgary Competition Mustad