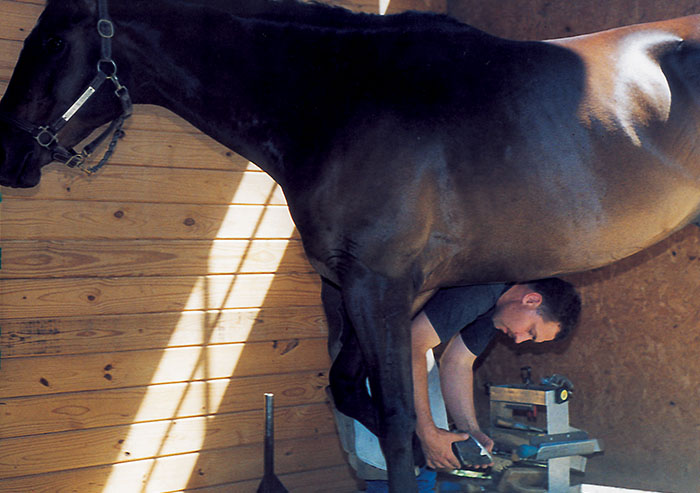 By Pat Tearney posted on May 1, 2002 | Posted in Business Practices, Shoeing

It's early, but one of Bill Ruh’s customers has apparently decided she’s stood quietly long enough. The farrier shakes his head as he describes her quick gallop toward freedom, across a west central Michigan bean field, in the general direction of nearby Grand Rapids.

“I hope it’s not going to be that kind of a day,” says the American Farrier’s Association (AFA) Certified Journeyman Farrier (CJF) from Vicksburg, as he gets his tools ready for the next horse on his list.

Grooms from the barn are back shortly, announcing that the escapee has been corralled after just a few short minutes of freedom, although they are surprised at how much ground the filly had covered in that time.

“That’s the way it goes sometimes,” says Ruh. “You have to get beyond it and move on.”

9:03 a.m. Although it’s still relatively early, the temperature is already hovering in the low 80s. The Midwest is in the middle of a heat wave, with high accompanying levels of humidity and the area around Grand Rapids has not escaped it.

Ruh has driven a little more than an hour from his home to shoe at this barn, which is home to about 35 horses. It’s the farthest away of any of his customers and he usually schedules Wednesdays here, although today he says it’s likely that he’ll elect to stay over night and continue shoeing the next day, as quite a few of the horses are being prepared for upcoming horse shows. While…