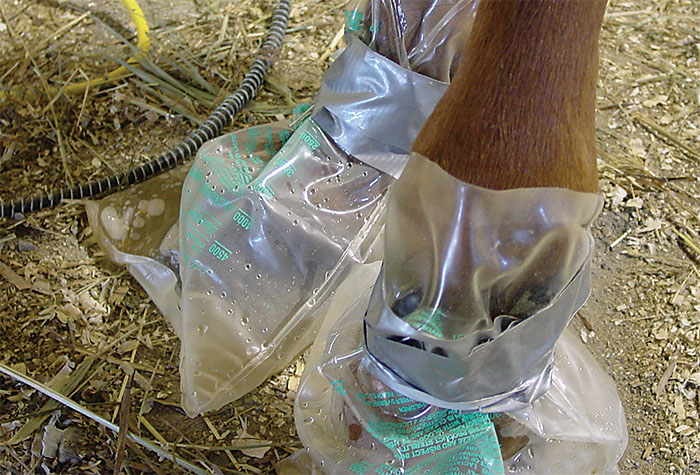 Soak Up This Idea For Treating Infected Hooves

By Nicholas B Denson posted on March 1, 2003 | Posted in Diseases, Therapeutic Shoeing

Brittle, weak hooves caused by infection can be successfully treated

Working with a horse that can’t keep its shoes on is something most farriers regularly deal with. Many times these horses have weak, brittle feet that easily chip and crack. Even if the hoof can hold nails, clinching often rips the nail through the wall providing little or no strength. If the horse pulls the shoes during turnout, you won’t have to worry too much about working with hoof, because there won’t be much left.

It is often thought that brittle, weak feet are strictly a nutritional or genetic defect. However, we often neglect to look into other causal factors, many of which are staring us right in the face.

Recently, I was presented with a Quarter Horse who — while exhibiting no severe angular and rotational deviations — suffered from very poor hoof quality. The owner said that “Hunter” had never been able to keep his shoes on for an entire 6-week schedule. The hoof wall seemed very brittle, and in numerous places, the dorsal hoof wall was chipped and peeling proximally toward the hairline.

One hoof exhibited a wall defect, indicating that an abscess had broken out at the hairline about 6 months earlier. Hunter was a typical Quarter Horse, having a large body with tiny feet. 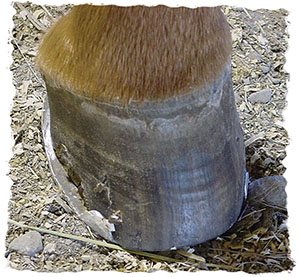 INFECTION TAKING OVER. Massachusetts farrier Nicholas Denson concluded that this brittle, weak front foot was under duress due to an infection.

Leaving The Door Open To Infection

Essentially, the foundation was not providing adequate support for the building. This…