Reinhard Saure is the only full-time farrier in an area larger than the state of California. Living and working near Whitehorse in the Yukon Territory of northwestern Canada means recalibrating one’s sense of time and distance. The nearest big cities are Anchorage, Alaska, a 15-hour drive to the west and Edmonton, Alberta, 20 hours to the southeast.

Remoteness is just one of the challenging factors in Saure’s business equation. There are also bitingly cold winter temperatures, short hours of daylight for 3 months of the year, mosquitoes and black flies in the summer, as well as the occasional bear wandering across the horse pasture.

But Saure wouldn’t have it any other way. (OK, so he could do without the black flies — they upset the horses.)

Looking For A Change

Saure came to the Yukon in 1986 from Germany, where he’d been a large animal veterinarian. He liked working with horses and other farm animals, but didn’t like being on call 24 hours a day, 7 days a week. He was looking for a different lifestyle and he knew from earlier travels in North America that the Yukon was the place he’d find it.

The Yukon Territory stretches north from the 60th parallel to the Arctic Ocean. It is 186,600 square miles of boreal forest and tundra that sparkles with snowy mountain peaks and clear rivers and lakes. Only 30,000 people live in the Yukon and 20,000 of them live in and around Whitehorse, the capital. 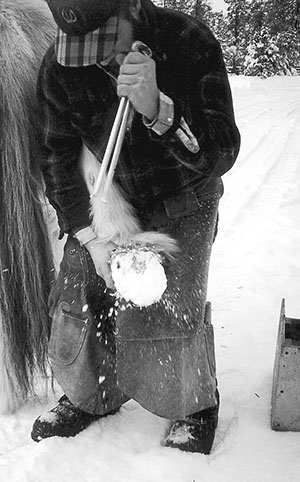 Getting A Better Fit