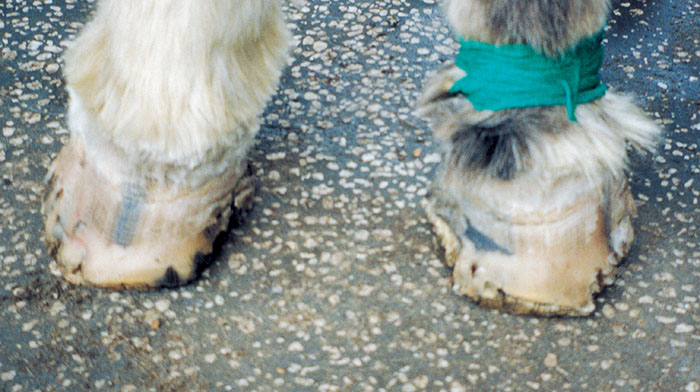 By Mike Podoll posted on March 1, 2003 | Posted in Therapeutic Shoeing

Hall Of Fame farrier had his hands full trying to help a 2,400-pound Clydesdale with water-logged, crumbling hooves

When it comes to founder cases, there isn’t much these days that can shake up Danny Ward. That is, until he was called to work on an emergency case regarding a 2,400-pound Clydesdale named Sydney.

“The first time I saw Sydney, I was horrified,” says the American Farrier’s Association Certified Journeyman Farrier from Martinsville, Va. “It wasn’t at all what I expected and I’d never seen anything like it on a horse that big.”

Ward didn’t know quite what to expect when he first received the call from a veterinarian. The vet asked for the International Horseshoeing Hall of Famer’s input and expertise on an emergency case involving a Clydesdale who was in dire straits.

The area in Florida had been experiencing torrential rains and damp conditions for several weeks and the Clydesdale’s hooves had become saturated with moisture. It wasn’t long before the crushing mass of the 2,400-pound Clydesdale began to crumble and deteriorate the sponge-like hooves.

Sydney’s hooves were in terrible condition. Huge chunks of hoof wall could be broken off with the farriers’ bare hands. It wasn’t long after that the 10-year-old, 19.2-hands-tall Clydesdale had foundered and the soles dropped. It was apparent to everyone that Sydney had become footsore and uncomfortable.

Two Heads Better Than One 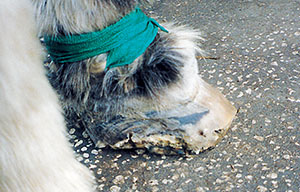 FEATHERS AREN’T FOR FLYING. Before any work could be done on the badly damaged hoof, Danny Ward and Kevin Fahey needed to clip the Clydesdale’s feathers in order to…

Why Heart Bars Work With My Foundered Cases