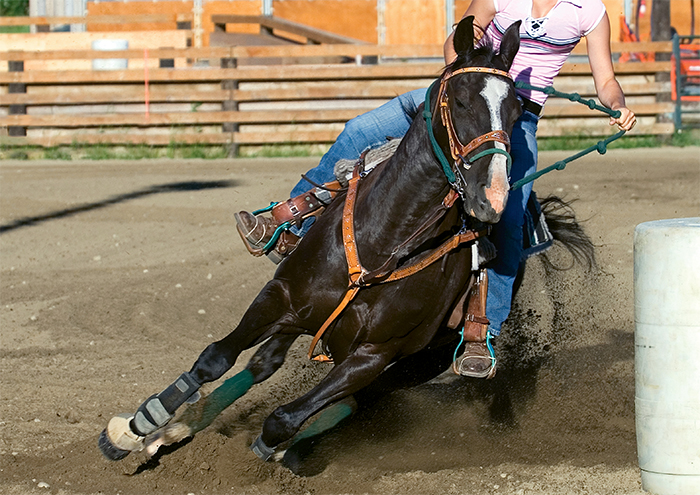 By Heather Smith Thomas posted on May 1, 2009 | Posted in Shoeing

Farrier Gene Hood says it’s important to watch how a barrel-racing horse works in a competition so that it can be shod appropriately. He thinks a big issue is not providing these horses with enough traction in their hinds.

Horses that compete in cutting, reining, barrel racing roping and other Western performance competitions must be able to perform at peak ability. The goal in shoeing these horses is to help them as much as possible — and hinder them the least.

Tommy Boudreau, an American Farrier’s Association Certified Farrier from Mineral Wells, Texas, has been shoeing Western performance horses for more than 25 years in the north central part of the Lone Star State. He says the most important thing for these horses is hoof balance. As a general rule, he tries to keep the toes as short as possible.

“The breakover is important. When I look at the bottom of the foot, the widest part of the foot is where my heel nail should go,” he says. “I want at least as much shoe behind the heel nail as I have out toward the front of the foot — 50% of the shoe should be in front and 50% behind. That’s a pretty good rule of thumb on an average foot.”

Boudreau tries to keep everything pretty basic. He lets the horse’s conformation, legs and feet dictate how he shoes it.

Advice for Dealing with Underrun Heels in Western Peformance Horses

Farrier Q&A: How does the footing that a horse will compete on change your choice of shoes, excluding calks?