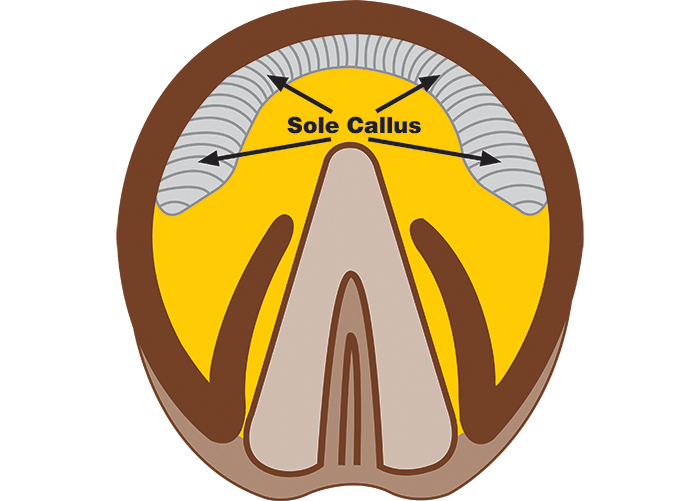 Pay special attention when preparing a foot with this shoeing system

FIGURE 1. The sole callus is the functional epidermal tissue that extends beyond the anterior distal border of the third phalanx. It is seen as the raised area just inside, or axial to the hoof wall in the front part of the foot. The sole callus maintains its relationship with the distal phalanx in the toe quarters (in the 10:00 and 2:00 position) and adapts quickly to changes in the environment to best offer protection and support to the distal phalanx.

When a foot is routinely trimmed too close at the toe each time the horse is shod, my research has shown that P3 seems to settle and the horse can be “off” for a few days. It is my belief that the sole ridge (callus) plays a major role in supporting P3 as shown in Figure 1.

When the sole ridge is over-trimmed, the laminae attachment of P3 at the distal border may be compromised, allowing the hoof wall to move forward, much as it does with laminitis. The settling of P3 within the hoof capsule causes a vertical deformity in the hoof wall at the hairline.

A common practice for farriers is to trim the toe and leave the heels alone to achieve proper pastern alignment1. However, when farriers trim the sole close at the toe to raise the foot angle, the heels are frequently left too long.

With the weakened laminae attachment at the distal border of P3, the hoof wall and long heels are…

How Radiographs And Joint Angles Can Guide Trimming And Shoeing

Hoof Trim has Varied Effects on the Equine Forelimb