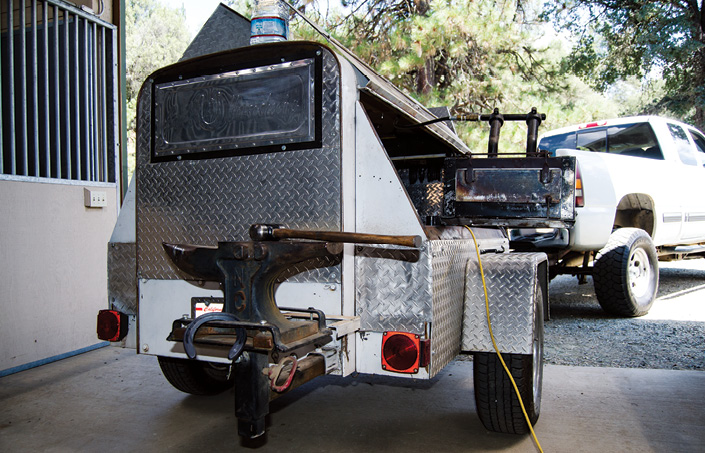 Creating A Simple And Functional Workstation

By Jeff Cota posted on May 9, 2016 | Posted in Business Practices, Equipment

Pictured Above: The converted Ingersoll-Rand air compressor trailer offers a number of conveniences including a low profile, easy maneuverability, as well as the ability to remove it from the truck at any time

If you’re handy and looking to save money on a farrier rig, a do-it-yourself project might be the way to go.

Both handy and looking to save money, Sam Fabila had big plans for a small U-Haul 3x5 box trailer that he converted into a rig.

“I was going to outfit it with doors coming off the side for easy access,” says the Pacific Coast Horseshoeing School instructor.

It was imperfect, though.

“It had 12-inch tires on it,” Fabila says. “They turn at a faster rate of speed than a regular tire. Then, with all the ranches I go on — a lot of gravel — it was wearing out those tires pretty fast.”

A friend suggested adding a larger axle to rectify the problem.

“It would lift it up a little bit and be a little more beefy,” says the Fiddletown, Calif., farrier. “I went to look at the axle he had, and he actually had it on this Ingersoll-Rand air compressor trailer that was still intact. It still had the compressor inside and the exhaust sticking out. He was going to take the axle off it and put it onto my box trailer.”

Fabila, though, had other ideas.

Since the trailer was made to carry a 2,000-pound air compressor, the axle could handle…

No Bells And Whistles, Just Keep It Simple

Building A Plain, Yet Not So Simple Shoe