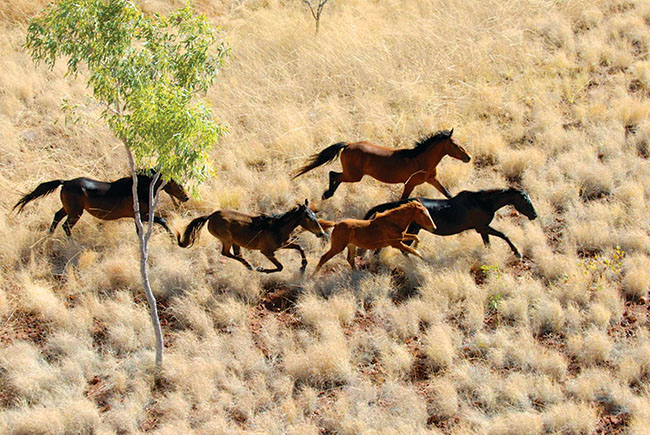 By Red Renchin posted on March 1, 2010 | Posted in Disciplines & Breeds

The image of wild horses running free appeals to nearly everyone. The sight of their beauty, strength and grace are magnificent to watch. I think it invokes that inner wish in all of us to be free and independent.

For horsemen who know something about the wild horse’s struggle to survive, it fosters even greater admiration and respect. Here in the United States we currently have about 30,000 horses living in the Western mountain states, with another 30,000 that have been captured and are being held in holding facilities.

While attending the Fifth Laminitic Conference in West Palm Beach, Fla., I had the opportunity to hear renown veterinarian Chris Pollitt speak on his research concerning the Australian brumby — Australia’s feral horse. They are similar to our mustangs in the fact that both have been infused with outside blood, and so while being called a brumby or a mustang, they may be of very different breeding and type.

In Australia, the number of brumbies is estimated to be between 600,000 and 1 million head. With good feed, they can double their population every 4 years. But every decade or so, parts of Australia suffer through sustained droughts. This can reduce their numbers by as much as 70%. They are scattered all over the continent living in several different environments. The result is that the horses are quite varied in body condition, type and behavior.

Australia is divided into four regions: the dry inland desert, the wet gulf savannah, the dry…